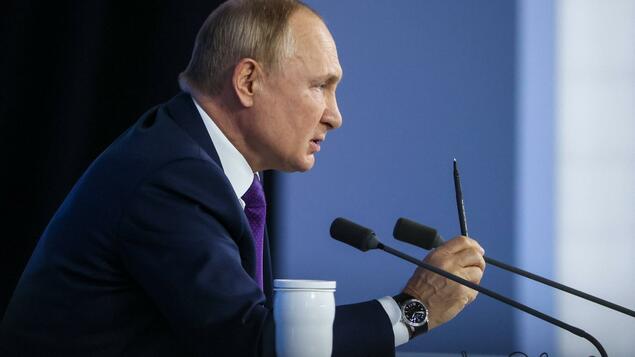 Russian President Vladimir Putin has threatened the West with unspecified steps if his proposals for binding security guarantees are rejected. If negotiations fail, the answer will depend on “the proposals that our military experts will make to me,” the president said on state television on Sunday.

In light of the tensions, NATO plans to hold talks with Moscow. The NATO-Russia Council may meet in January for the first time in two and a half years. Moscow is still studying participation.

But Putin has signaled once again his willingness to resolve the new tensions in the Ukraine conflict diplomatically. Talks with the United States are scheduled for January.

In a draft agreement that has already been published, Moscow calls for an end to NATO’s eastward expansion, which it sees itself as threatening. In addition, Russia wants to ensure that Ukraine does not become a member of NATO. The Western military alliance has long rejected this demand.

Putin’s spokesman, Dmitry Peskov, warned on state television against postponing the upcoming talks. “A resolution is required, a quick and tangible solution – and a solution that suits our interests.”

Some troops return to the barracks

For weeks, the West has been particularly concerned about the fact that Russia has amassed tens of thousands of soldiers in regions not far from Ukraine. The Ministry of Defense in Moscow announced, on Saturday, the return of more than 10 thousand soldiers to their bases after a maneuver. However, it remained open, how many of them were on the border with Ukraine.

At a press conference on Thursday, Putin did not give a clear answer to a question if he could guarantee that his country would not invade Ukraine. “Russia did not attack anyone first,” his spokesman Pesco said over the weekend about the West’s concerns.

In 2014, Russia annexed Ukraine’s Crimea despite all international protests. The West threatened Moscow with dire consequences in the event of an attack on the neighboring country.

For now, all signs point to dialogue. A NATO official in Brussels said that Secretary-General Jens Stoltenberg had decided to hold a meeting of the NATO-Russia Council on January 12.

The conflict over eastern Ukraine has been going on since 2014.

Deputy Foreign Minister Alexander Grushko told the state agency TASS on Sunday that the time, form, modalities and composition of the delegation are currently being decided. “As military security issues are at stake, it is imperative that high-ranking military officials participate.”

Repeatedly, there have been tensions in the conflict in eastern Ukraine, which has been going on since 2014. In the Luhansk and Donetsk regions, Ukrainian government forces and Russian-backed separatists have been facing each other since 2014. According to UN estimates, more than 13,000 people have died there Until now.

Ukrainian President Volodymyr Selinsky in a conversation with representatives of the United States asked Congress and the Senate that the United Nations should participate in the peace process.

“Now, more than ever, it is no longer words that matter, but decisive actions. My goal is to stop the bloodshed in eastern Ukraine. The security of Europe is in danger.”

In eastern Ukraine, shortly before Christmas, the warring parties agreed to abide by a ceasefire that had been in place for a year and a half. However, the Organization for Security and Cooperation in Europe (OSCE) has reported numerous violations.

In a statement published on Sunday evening, the Organization for Security and Cooperation in Europe complained that the work of independent monitors had been obstructed the previous day in the Luhansk region.