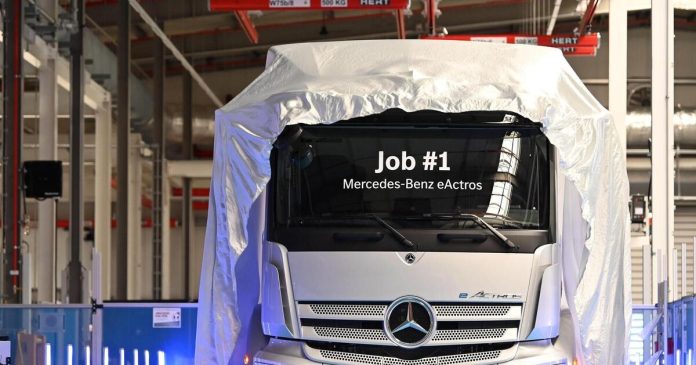 eActros has been off the production line at truck plant Wörth since October 2021. Daimler Truck announced on Monday that the first vehicles have been delivered.

Karin Radstrom, CEO of Mercedes-Benz Trucks, has delivered the first all-electric eActros series to logistics provider DB Schenker for heavy distribution. According to the press release, DB Schenker is using the eActros 300 to transport cargo on pallets in the Leipzig region. The car, with a permissible gross weight of 19 tons, rolled off the assembly line as scheduled last year. DB Schenker has already gained experience with a prototype of eActros as part of the “eActros Innovation Fleet”.

Another eActros is moving from serial production to logistics provider Dachser. According to Daimler Trucks, Dachser already plans to include more eActros in its vehicle fleet as part of its climate protection strategy. Vehicles are an important component of the zero-emission city delivery concept which is currently being expanded to 11 European metropolitan areas. In Stuttgart, Dachser eActros is used to deliver general cargo in the city center, ie transported cargoes that are too large and too heavy to ship parcels.

The eActros that has been produced by the Federal Ministry for Digital Affairs and Transport is being funded in a total of €10.77 million as part of the directive to promote light and heavy commercial vehicles with alternative climate-friendly engines and an associated tank and tank. Shipping Infrastructure

OTS: Börsen-Zeitung / The Last Exit, a comment on the oil...