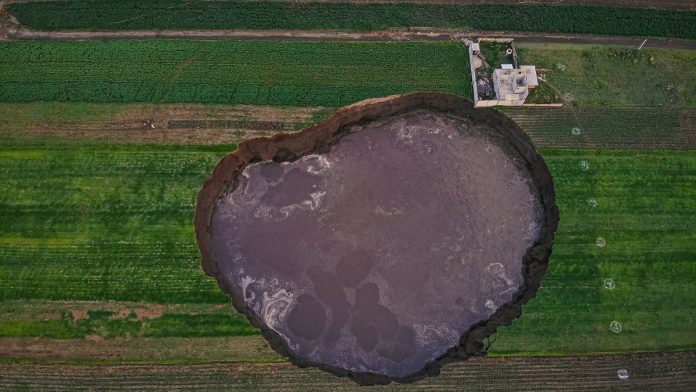 The hole continues to grow

The crater of the volcano in Mexico is a mystery

First, there was a loud noise, and then suddenly a hole in the ground in a field in Mexico opened. But it doesn’t stop there: in the past few days, the hole has widened significantly. So far, there is only speculation about the cause.

A huge crater has opened in a field in central Mexico for reasons that are not yet clear. The general coordinator of the local civil defense, Jose Antonio Ramirez, said the crater filled with water continues to widen. The only house nearby, located right on the edge of the crater in the village of Santa Maria Zacatepec in the central state of Puebla, is in danger. The cause is now being investigated.

The homeowner heard a loud noise at first at the end of the week. After touring the field, I discovered a hole in the ground five meters in diameter. Ramirez told Aristegui Noticias radio program that the hole is now 97 meters by 78 metres. This is roughly the size of a football field.

According to the National Civil Protection, groundwater currents in easily eroded soil can cause the crater to form. The depth of the hole is estimated to be about 20 meters. The Popocatépetl volcano is located near the city, about 120 kilometers southeast of Mexico City. There are deposits of ash and fine volcanic fragments in the ground.