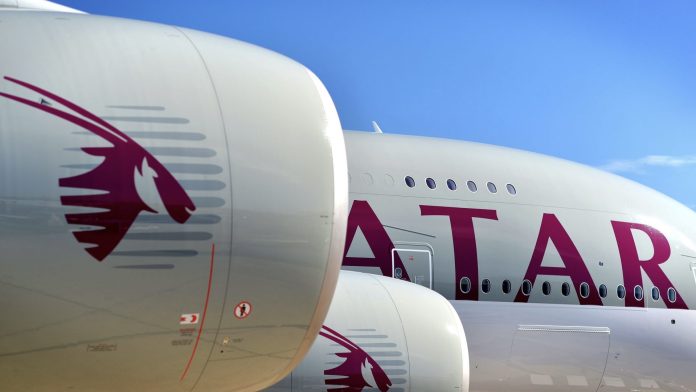 In a few days, Qatar Airways will use the Airbus A380 on passenger flights again. The double deck is already in continuous use by Qatar Airways. In this article you will discover why the A380 can actually be seen in the air over Doha.

It is an unusual sight. The Airbus A380 can be seen in Qatar Airways’ colors again after more than a year and a half. Not on the ground, but in the air. The airline is currently preparing several double-decker planes to return to passenger operations – technically and personally, for example among other things. Aerotelegraph mentioned.

In continuous use to return

The return of the Airbus A380 to passenger service is imminent on Qatar Airways. From December 15, Qatar Airways will use its double-decker aircraft daily on its flights to Paris Charles de Gaulle and London Heathrow. In order to allow the aircraft for maintenance and testing to take off on scheduled service, a few (pilot) flight hours are required in advance. They are not only used to inspect the aircraft, but also to get the pilot and cabin crew familiar with the types of aircraft again.

Unlike British Airways, for example, Qatar Airways does not use the A380 on real passenger flights, such as between Doha and Dubai, but instead operates several short flights over Doha several times a day. As a reminder – British Airways uses both decks for short flights between London, Frankfurt and Madrid. Use in passenger flights has the advantage that cabin crew interact directly with passengers and can study service operations.

Currently, Qatar Airways wants to reactivate five of its ten Airbus A380s. Three of them had already returned to the air. The five-and-a-half-year-old Airbus A380 with registration number A7-APG has been in use since November 12. By December 2, the double-decker had completed about 120 flights that took between 26 and 47 minutes. On average, the A380 makes approximately six take-offs and landings per day, which is especially important to pilots.

On November 13, another biplane, registration number A7-API, took off on a short-haul flight. However, the A380 has been in continuous use again since the 1st of December. On December 1 alone, the aircraft completed a total of eight short flights over Doha and the Persian Gulf. A third A380, with registration number A7-APH, took off on November 24 for a half-hour flight.

Conclusion on the return of the Airbus A380 to Qatar Airways

Qatar Airways is taking a different approach to revitalizing the Airbus A380, unlike, for example, British Airways. Without short-haul passenger flights, the airline advises both pilots and cabin crew on empty flights. Doubtful – environmentally and economically. However, the return of the Airbus A380 to Qatar Airways makes me optimistic that aviation will continue to recover in the coming months.

Traveling is my passion. Traveling in luxury doesn’t have to be expensive. We’ll show you how to do it here on reisetopia!