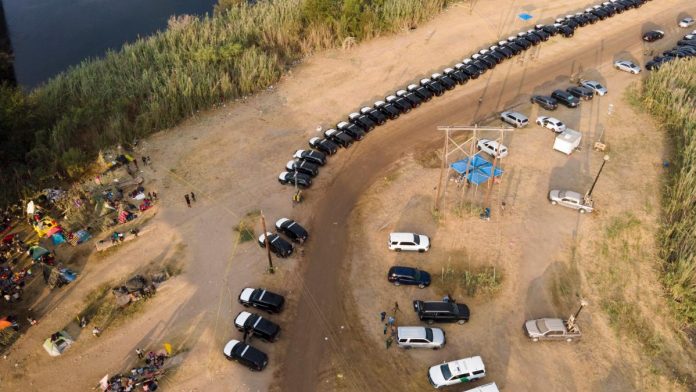 Texas prevents immigrants from crossing the border with vehicle barriers

Several US vehicles line up in front of the river bordering Mexico to prevent illegal immigrants from crossing the border. “The strategy works,” says Texas Governor Abbott. On the other hand, people from Haiti in particular are stuck.

DrThe US state of Texas is using unprecedented tactics to counter the influx of thousands of migrants at the US-Mexico border, according to Governor Greg Abbott. That includes a “steel barrier that keeps people from crossing the border,” the Republican said at a news conference in the Texas border town of Del Rio on Tuesday.

The barrier consisted of US vehicles lined up for miles on the banks of the Rio Grande. “This strategy is working,” Abbott said, without elaborating.

In the past few days, thousands of people – many of them Haitian immigrants – have taken the opportunity to walk across the border river into Texas when the water level was low.

The situation in Del Rio has recently come to a head: People are waiting there under a bridge in makeshift tents, and the Biden government continues to rely on mass expulsions. Over the past week, about 16,000 immigrants have arrived at the bridge, Governor Abbott’s office said. Abbott said 8,600 migrants were still there as of Tuesday.

CNN reported that some have since been transferred to other camps. According to US media reports, most Haitians do not come directly from Haiti, but have been residing recently in South American countries, possibly since the devastating earthquake of 2010.

The majority of Haitian immigrants fall under the so-called Address Rule 42, which the government under Donald Trump put into effect at the start of the pandemic and used to largely shut down borders. This is justified with the risk of introducing Covid-19. Under Biden, the rule has been extended with the exception of unaccompanied minors.

Domestically, pressure is mounting on the Biden government from all sides. At the beginning of the week, images of US border officials riding on horseback with migrants in Del Rio were met with particularly fierce criticism. The Republican governor of Texas, Abbott, accused Democratic US President Joe Biden of failure: “The Biden government does nothing to secure the border.”