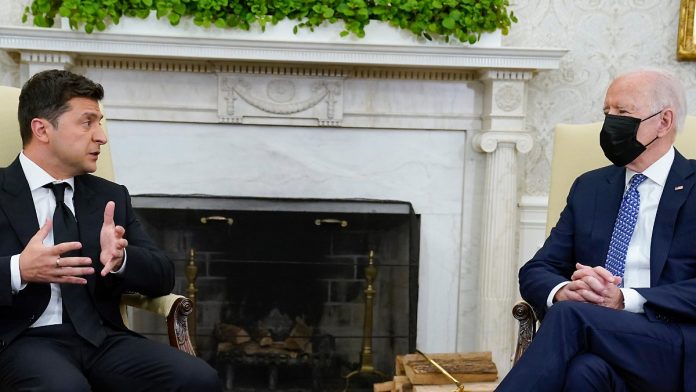 Russia has amassed its forces on the Ukrainian border for weeks. Kremlin chief Putin warns Joe Biden by phone of an invasion. Now the US president is talking to the head of state of Ukraine and assures him in advance of his support for the country’s “territorial integrity”.

US President Joe Biden wants to talk to Ukrainian President Volodymyr Selinsky on Sunday about the deployment of Russian forces near the Ukrainian border. Washington said that in the phone call, Biden would affirm US support for Ukraine’s sovereignty and territorial integrity. The US government will also prepare “next diplomatic efforts” to de-escalate.

Biden had already spoken to Russian President Putin on Thursday about the deployment of Russian forces near the Ukrainian border. The West fears that Moscow may attack the neighboring country. The Kremlin denied there were any plans to launch an offensive, rejected criticism of troop movements, and accused Ukraine and NATO of “provocations”.

In the conversation, the American was said to have threatened the Russian head of state with harsh sanctions. Biden told Putin, according to the White House, that the United States and its allies would respond “firmly” in the event of an invasion. Russia should “de-escalate” tensions with Ukraine.

Biden also wants to talk to Zelensky about other planned talks between Moscow and Washington, which would help defuse the conflict in Ukraine. employment Twitter The Ukrainian president wrote that the goal was to agree on common positions “for peace in Ukraine and security in Europe.”

Russian and US diplomats plan to meet in Geneva on January 9-10. NATO Western Defense also plans to hold a meeting with the Russian side on January 12. The next day, a meeting of the Organization for Security and Cooperation in Europe (OSCE) will be held.

For weeks, the United States has accused Russia of massive deployment of its forces in areas on the border with Ukraine. He feared that Russian forces could invade the former Soviet Republic. Moscow denies such plans. In 2014, Russia annexed the Ukrainian Black Sea peninsula of Crimea. It also supports pro-Kremlin separatists in eastern Ukraine.