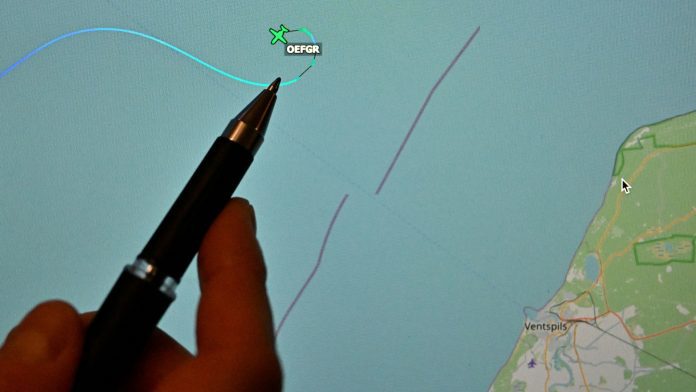 A private plane on its way from Spain to Cologne flew over the Baltic Sea and crashed into the sea off the coast of Latvia. The four passengers may not have survived.

Early in the evening, the Swedish authorities sent the first emergency call: there is a small plane with an emergency on board between the Swedish islands of Öland and Gotland – according to the spokeswoman.

The private plane took off from Spain in the afternoon and was supposed to land in Cologne. Instead, the machine flew north with four people on board – without contacting air traffic control.

Perhaps no one survived, Anne-Louise Karlsson of the Swedish Shipping Authority said in the evening: “There is a plane and a helicopter at the scene. If a plane falls into the water from a height and at high speed and you are still only wrecked, then there are no survivors.”

It is said that it is no longer possible to connect to the private jet through France. According to the Swedish authorities, the plane did not land in Cologne as planned, but continued in the direction of Denmark and Sweden and then towards Latvia.

The plane was escorted by Eurofighter fighters from Germany as well as Danish planes. The pilots could not see anyone in the cockpit.

What exactly happened on the plane remains unclear. Swedish aviation expert Hans Kiel told Swedish Radio: “The idea is that the people on board fainted due to the low pressure. The autopilot was turned on, and his plane held on. For a long time until the fuel ran out. Then he fell into the sea.”

See also  Suspicion of corruption in the European Union: what next?

An Air Force spokesman said that WDRthat the static flight data indicated that the autopilot was operating and that the pilot might be unconscious.

The discovery of secret documents from the Biden era when he...