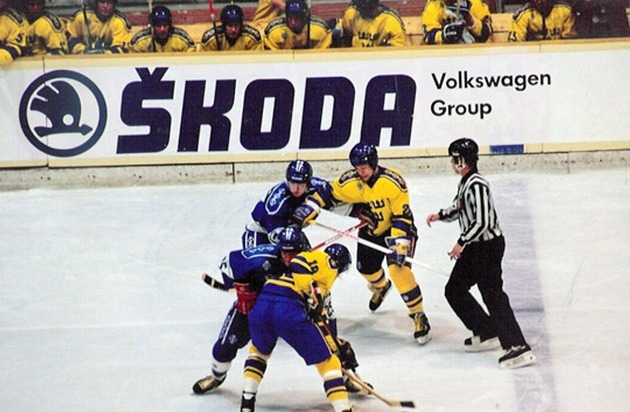 ŠKODA AUTO is once again this year the main sponsor of the IIHF World Ice Hockey Championship in Finland (May 13-29). The car manufacturer has supported the international sporting event for 30 years. The company was initially a partner in the Ice Hockey World Championships in 1992 and became the main sponsor the following year. Since then, the brand logo has been prominently represented on plazas and venues, and Skoda also regularly supplies a fleet of vehicles to organizers. Moreover, the glass trophy designed by ŠKODA Design for the best player is now one of the brands of the championship.

In 1992, Škoda Auto supported the World Ice Hockey Championship as a partner for the first time. The tournament was held in what was then Czechoslovakia, and the stadiums were in Prague and Bratislava. A year later, the Czech car manufacturer became the main sponsor of the World Ice Hockey Championship and expanded its commitment: the brand logo adorned the central circle as well as the players’ jerseys. The FAVORIT and FORMAN models debuted at the 1993 World Cup in Munich as the first official cars of the tournament. Since then, ŠKODA AUTO has used the great public interest and reach of the international sporting event to present its new models to the international audience.

In 1996, Skoda presented the first modern generation of the brand’s best-selling Octavia at the World Ice Hockey Championships in Vienna, and in 2008 fans in the Canadian cities of Quebec and Halifax got their first look at the second generation SUPERB. At the same time, commercials for the model were broadcast on television. In 2019, Skoda Auto launched electric mobility at the World Ice Hockey Championship in Slovakia: the manufacturer presented the SUPERB iV and CITIGOe iV here.

As part of its commitment, which was recognized in 2017 as a Guinness World Record for the longest major sponsorship in the history of the World Sports Championships, ŠKODA AUTO is providing 45 vehicles to the organizers of this year’s Ice Hockey World Championships. The fleet also includes 15 ENYAQ COUPÉ RS iV aircraft. With a system output power of 220 kW, it is the most powerful series model ever built by Skoda. The fleet also includes 30 SUPERB iV series vehicles (combined fuel consumption 1.7 – 1.5 l / 100 km, combined CO2 emissions 38 – 34 g / km) with a plug-in hybrid drive and a KODIAQ SUV.

Skoda Design has designed the Crystal Glass Trophy for the best player in the championship since 2018. The cut-outs of the trophy are inspired by ice skating tracks and combine the dynamics of ice hockey with the current and emotional design language of the Czech automaker. Also this year, the trophy will be presented to the most valuable player on the last day of the tournament during the award ceremony.

The car manufacturer has exclusive content for ice hockey fans on its official social media channels and ŠKODA Storyboard. Among other things, you will find an overview of the online platform 30-year partnership between ŠKODA AUTO and the IIHF Ice Hockey World Championships. ŠKODA AUTO is also accompanying the Ice Hockey World Championships as a supporter of the official IIHF 2022 app on fans’ smartphones. It provides information at all times about current scores and what is happening on the ice and can be downloaded for free from the Google Play Store or the App Store.

Specific consumption and emission values ​​have been determined according to legally established measurement methods. As of September 1, 2017, certain types of new vehicles have already been approved under the Globally Harmonized Light Vehicle Test Procedure (WLTP), a more realistic testing procedure for measuring fuel consumption and carbon dioxide emissions. Since September 1, 2018, WLTP (Worldwide Coordinated Light Vehicle Testing Procedure) has replaced the Previous Driving Course (NEDC). Due to more realistic test conditions, fuel consumption and CO2 emissions values ​​measured according to the WLTP are in many cases higher than those measured according to the NEDC. For more information on the differences between WLTP and NEDC see www.skoda-auto.de/wltp.

The NEDC values ​​are still mandatory to be communicated. In the case of new type approved vehicles according to WLTP, the NEDC values ​​are derived from the WLTP values. Additional specifications for WLTP values ​​can be provided voluntarily until their mandatory use. To the extent that NEDC values ​​are presented as ranges, they do not refer to an individual vehicle and are not part of the display. They are only used for the purposes of comparing different vehicle types. Additional equipment and accessories (attachments, tire shape, etc.) can affect relevant vehicle parameters, such as for example weight changes, rolling resistance, aerodynamics, weather and traffic conditions as well as individual driving behaviour, they are Affects fuel consumption, power consumption, CO2 emissions and vehicle mileage.