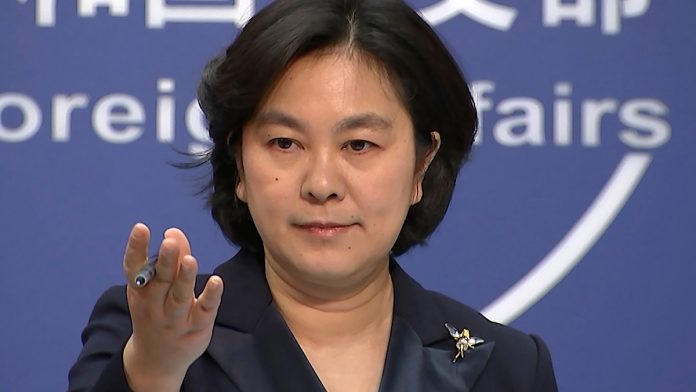 silence on russia
China accuses US of escalating conflict in Ukraine

China accuses the United States of further fueling the conflict in Ukraine through sanctions and arms deliveries. On the other hand, the State Department evades questions regarding sanctions against Russia. It remains unclear how this corresponds to the sovereignty of Ukraine claimed by China.

China accused the United States of exacerbating the situation in the Ukraine crisis by imposing sanctions on Russia and delivering weapons to Kiev. Foreign Ministry spokeswoman Hua Chunying said the US measures “raised tensions” and “provoked panic.” “If someone throws fuel on a fire and blames others, that behavior is irresponsible and immoral.” Beijing has so far taken a cautious stance on the conflict in Ukraine.

Russia on Monday recognized the independence of the separatist regions of eastern Ukraine and announced that it would send Russian soldiers. In response, US President Joe Biden on Tuesday announced financial sanctions against Moscow and other arms sales to Ukraine. Great Britain, the European Union, Japan and Australia also decided to impose sanctions on Moscow.

When asked by reporters about possible Chinese punitive measures against Russia, the Chinese Foreign Ministry spokeswoman replied: “Sanctions have never been an essential and effective way to solve problems.” She said China “called on all parties to respect and attach importance to each other’s legitimate security concerns” and seek a negotiated solution.

China for the sovereignty of Ukraine

At a meeting of heads of state in Beijing in early February, Russia and China combined their positions on the Ukraine crisis and other security issues. Presidents Vladimir Putin and Xi Jinping issued a joint statement calling, among other things, to halt NATO expansion.

However, Beijing later indicated that it would not support Putin if troops were sent to Ukraine. At the weekend’s Munich Security Conference, Chinese Foreign Minister Wang Yi said that the sovereignty of all countries should be respected. “Ukraine is no exception,” he said. At an emergency meeting of the UN Security Council on Monday, China did not explicitly condemn Russia’s actions, but called on all parties to the conflict to “restrain”.

See also  Tensions in Montenegro: protests against the new head of the Church

Interior Minister Visser: “We see an increase in immigration – also...