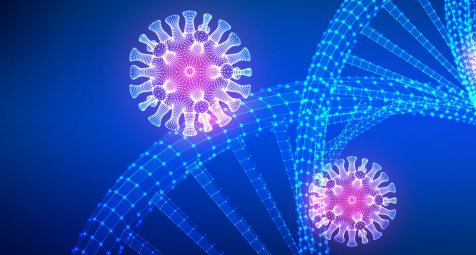 BERKELEY/CA – Whether SARS-CoV-2 can infect a cell and how effectively it replicates depends not only on the presence of the ACE2 receptor and the TMPRSS2 protease.

A systematic study of cell cultures in natural genetics (2022; DOI: 10.1038 / s41588-022-01131-x) demonstrates that a variety of factors can influence infection and pathogenicity. Mucin molecules on the cell membrane could be of great interest.

The research team led by Patrick Hsu of the University of Berkeley used CRISPR gene scissors to selectively destroy individual genes (“loss of function”) or increase their formation (“gain-of-function”) in the Calu-3 cell line, which arises from the respiratory epithelium of a lung cancer patient) to study the effect of SARS-CoV-2 infection.

As expected, the intact genes for ACE2 and TMPRSS2 were the most important prerequisites for successful infection. But a large number of other genes (and the proteins or control genes encoded there) also played a role.

On the initial side, that is, the factors that facilitate SARS-CoV-2 replication, were AP1G1, for example. It encodes the clathrin adapter involved in cellular endocytosis. This is an import mechanism that viruses use to enter cells.

The CHUK gene encodes components of the NF-kB signaling pathway, affecting transcription and thus potentially the transformation of virus genes into proteins. NFE2 also encodes a control gene (transcription factor) and TRAF3IP2 which is an enzyme involved in immune defense but somewhat useful for SARS-CoV-2.

On the antiviral side, the researchers identified several control genes such as TEAD3 or ZNF275 that prevent the formation of new viruses in the cell. Cell division promoted by CCNE1 could also make virus replication more difficult.

The role of mucin should be familiar to clinicians. These glycoproteins are a major component of the mucus that coats the epithelium of the airways (and other hollow organs). Previous analysis of the genomes of intensive care patients showed that mucin formation can influence the course of the disease.

Myosin glycoproteins were also a critical inhibitor of SARS-CoV-2 in Calu-3 cell cultures. Myosins, which are strongly attached to cells, appear to be a barrier to SARS-CoV-2 and its variants in particular.

If the mucins are enzymatically eliminated, the viruses are “free” and the infection is significantly increased. This applies not only to SARS-CoV-2, but also to other respiratory pathogens, although the results here were inconclusive. In some viruses, mucin appears to facilitate infecting cells.

This also applies to mucin released from the epithelium into the environment. These have also partially facilitated infection with SARS-CoV-2. © rme / aerzteblatt.de

Mosquito repellent – from best to worst in our new test...