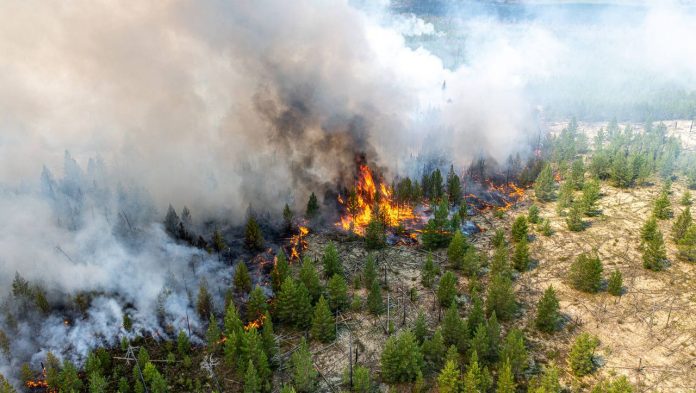 at Russia Areas of more than 500 square kilometers of forest are ablaze, which roughly corresponds to the area of ​​Lake Constance. About 3,000 firefighters are currently battling 75 ongoing forest fires. Also in use: 28 firefighting aircraft. The authorities said the fire had spread again compared to the previous day. However, there are also successes in the firefighting work: on Saturday alone, the fires were extinguished over a total area of ​​32 square kilometers.

“The number of fires is declining as usual in June, because fresh grass is increasing, for example,” said a spokesperson for the environment agency. green area. However, not all clarity can be given yet. As in the previous year, affected mainly Siberia.

For example, the fire zone is spreading on Lake Baikal in Siberia and in Yakutia in northeastern Russia, the spokesperson said. “This year, the authorities are taking more stringent measures to prevent and combat fires.” Many fines were imposed, and some people were even arrested.

Many regions want to reduce the size of fires

According to the Russian government on Sunday, 2.7 billion rubles (equivalent to 31 million euros) will be used to fight the fire. A large part of the money is for firefighting work and a small amount is for fire monitoring.

According to Russian environmentalists, many forest fires are caused by carelessness, for example because camp fires got out of control or ignited dry grass. This time the fires were slightly less than in previous years. However, fires in Russia have been going on for months.

See also  One picture too many: Slovenia's presidency of the European Union begins with a scandal

“The official data is still very different from the reality,” a Greenpeace spokesman said. The Ministry of Environment complained a few days ago that some areas are reducing the size of the fires. The reported information did not agree with the analysis of satellite data.

In the largest country by area Land Destructive fires happen again and again in the summer months. They are often found in remote areas and generally do not threaten villages and towns. However, residents of the affected area suffer from toxic smoke.