Home Tech Not only astrophysicists were delighted: Einstein’s theory of relativity successfully tested a... 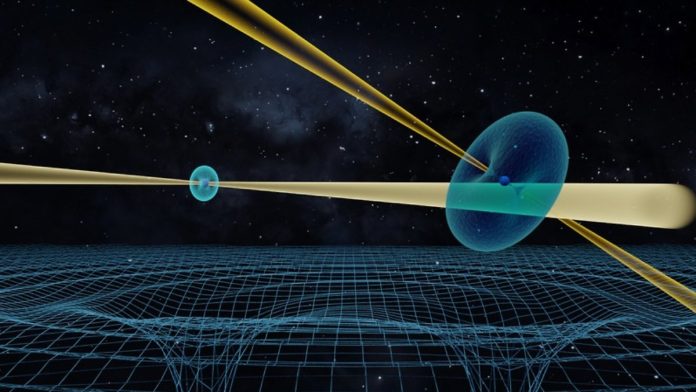 Einstein’s theory of relativity has passed the pulsar test

Albert Einstein’s general theory of relativity was published more than 100 years ago – and it continues to stand up to extensive testing to this day. However, astrophysicists are not only happy with the success of the latest test on pulsars – they will find an even more exciting aberration.

Albert Einstein’s general theory of relativity continues to withstand all tests. An international team of researchers has used an extreme binary star system — two rapidly orbiting neutron stars orbiting each other in a narrow orbit — to examine seven phenomena predicted by the theory of relativity, some for the first time. Einstein’s theory agrees with observations with 99.99 percent accuracy, So the scientists in the journal “Physical Review X”.

“We examined a two-star system with extremely high densities, which is a unique laboratory for testing gravitational theories in the presence of very strong gravitational fields,” explains Michael Kramer of the Max Planck Institute for Radio Astronomy in Bonn, who leads the team. . As early as 2003, members of the research team discovered the unique to date system of two radio pulsars. For 16 years, astronomers have used seven radio telescopes to observe radiation from pulsars with great precision to verify the theory of relativity.

Pulsars are neutron stars, which are remnants of exploding stars in which matter is tightly packed as in atomic nuclei. It is only 15 miles across, and contains the same amount of mass as our Sun. Many neutron stars rotate at high speeds and have a strong magnetic field. Such a neutron star emits strong combined light and radio radiation along the north-south axis of the magnetic field. Since the axis of the magnetic field is tilted against the axis of rotation, this combined beam sweeps through space similar to the cone of a lighthouse. If this cone collides with the Earth during its rotation, then astronomers receive regular pulses of radiation from the neutron star – hence the name of these celestial bodies.

The PSR J0737-3039 system studied by Kramer and colleagues is located 2,400 light-years from Earth and consists of two pulsars that orbit each other in just 147 minutes at a distance of less than a million kilometers. For comparison: the Earth is 150 million km from the Sun. One of the pulsars rotates very quickly, about 44 times per second, while its smaller companion takes 2.8 seconds to complete one revolution. The radio radiation emitted by the two objects provides a unique opportunity so far to investigate relativistic effects in the case of rapid motions and strong gravity.

The researchers were able to measure the energy loss due to gravitational wave radiation from slow changes in radiation pulses that reach the Earth. They were also able to determine the time-deceleration of the gravitational field of pulsars and observe the deflection of light by gravity – the latter for the first time in the strong gravitational region, the scientists confirm.

The first experiment “with such a strong curvature of space-time”

“We see for the first time that light is delayed not only due to a strong curvature of space-time around a companion,” says Ingrid Stears of the University of British Columbia in Vancouver, “but also that light is delayed by a small angle of 0.04 degrees that we can demonstrate.” Such an experiment had never been done before with such a strong curvature of spacetime.”

The team was also able to demonstrate the so-called perihelion, a slow rotation of ovals in orbit. This phenomenon is already known in our solar system from the orbit of the planet Mercury – and its explanation was one of the first great successes of the theory of relativity. In the case of a double pulsar, Kramer and his colleagues were able to go one step further: Because pulsars rotate rapidly, they “pull” spacetime into their surroundings with them, so to speak. The researchers were also able to demonstrate this triple lens effect by spinning the elliptical orbits.

Search for “theory of everything”

Astrophysicists see the recent success of Einstein’s general theory of relativity, now over 100 years old, with one eye laughing and the other crying. It would be even more exciting for scientists to find a deviation from theoretical predictions – because such a deviation could open a window on “new physics”.

Today’s materialist world view is based on two pillars – quantum mechanics and relativity. But the two theories don’t fit together – which is why researchers are looking for a “theory of everything” extraordinaire. However, the double pulsar PSR J0737-3039 has so far not provided any indication of any new phenomena associated with it.

This is what the new Outlook for Windows 10 looks like