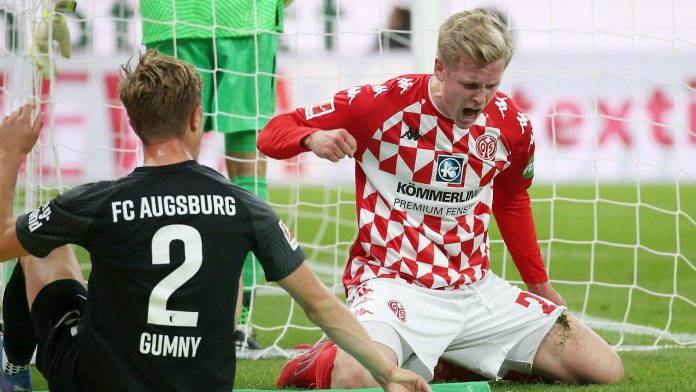 The kidnapped people of Mainz roll over Augsburg

Crisis averted for now: with a great first half, FSV Mainz stunned completely overwhelmed Augsburgers in the evening. With three goals behind, Rheinhessen’s side will miss nothing in the second round and are celebrating their fourth win of the season in the Bundesliga.

With a fantastic 4:1 (3:0) edit against FC Augsburg, FSV Mainz 05 ended the looming crisis. Ironically, Zero Five showed absolutely no fear against the dreaded former opponent in the evening match of the Bundesliga. The hosts laid the foundations of success in front of 19,400 spectators with a superb performance in the first half, with goals from Karim Onisio (10th minute), Stefan Bell (15) and Jonathan Burkhardt (26). Augsburg was hoping to catch up after substitute Andy Zekeri (69) scored, but Burkhardt, who played hard against national coach Hansi Flick, immediately removed any doubts about winning with a 4-1 victory (71).

In the closing minutes, the crowd sang “Oh, what a beautiful one.” While Mainz cemented their place in the middle of the table after losing three matches, Augsburg’s relegation fears intensified after their first defeat to Mainz after five unbeaten matches in Rheinheisen. Mainz Sports Director Martin Schmidt spoke about the game “You have to put your foot in it” shortly before kick-off at DAZN. And the players showed it immediately.

Mainz started strong – suddenly a 2-0 lead after a quarter of an hour. With a low cross from Sylvain Widmer, Augsburg defender Robert Gomni made a mistake and kicked the ball. Onisiwo, stalking behind him, accepted the gift, hit the ball and left FCA goalkeeper Rafal Jekevich no chance to defend.

It was Mainz who did what Augsburg coach Markus Wenzierl really asked his team. “You always have to be active, and you should avoid negative phases in the game,” he said. But the hosts did not allow this at first. Good compositions, high speed, early disturbances – Mainz fans really enjoyed their team game. In Augsburg, everything went wrong at first. Weinzerl shouted, pointed and ran on the sidelines. After 0:3 he sat frustrated.

First of all, Mainz defender Bell appeared in the opponent’s penalty area and pushed the ball past the unfortunate Djekević in a world-class attacking style. Almost nothing came of the guests in the first 45 minutes. On the contrary: they should have been happy because the score was only 3-0 after a strong header from Burkhardt after a brilliant cross from Onisio. Strong player Onisiwo (35) and Burkardt (40) had more chances, but Gikiewicz blocked worse.

Unsurprisingly, Augsburg changed hands at the start of the second half. Tobias Strobel and Zekeri came for Jomni and Sergio Cordova. Whatever Winzierl did or said in the locker room during the break, it had at least little effect. Finally the guests played enthusiastically and offered resistance. After the 57th minute Ruben Vargas had the opportunity to score Augsburg’s first goal, but the Swiss man’s crane crossed the goal. When Zekeri scored the net, the Augsburgers were hoping – for two full minutes. He then hit Burkhardt for the second time and enjoyed a well-deserved applause from the crowd when he was substituted (76th place).

This is the reason why the permanent winner Udermatt stays on...