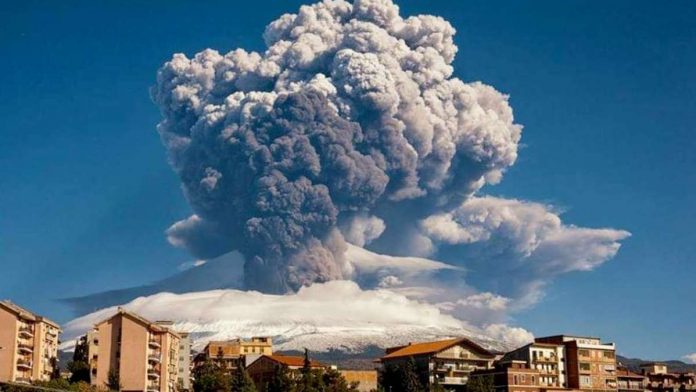 Mount Etna Sicily has been on the lookout since the beginning of the year. Now the volcano in Italy is awakening again – at the same time as the “hurricane”.

Update from Thursday, October 28, 2021 at 11am: A strong storm is currently blowing near Etna volcano. Since Sunday (October 24, 2021) the continuous low pressure area has caused torrential rain and thunderstorms. The city of Catania is particularly affected. Many streets turned into raging rivers.*Two people have already died. Catania is only about 35 kilometers from Etna, which erupted around the same time the storms broke out on Sunday (see first report).

About 600 liters per square meter were measured at a measuring station near the volcano between Sunday and Tuesday, according to meteorologist Sebastian Altnau of the German weather service. Our editorial team* to explain. “The element of topographical crowding certainly played a role here,” said the DWD expert.

For comparison: such quantities of water were sometimes found in the city of Catania in one day. In a wider area around the volcano, between 150 and 300 liters per square meter was measured on average.

Volcanic eruption in Sicily: a severe storm in Catania without consequences

The area of ​​persistent low pressure in the Mediterranean, which was at the same time declared a “hurricane”, has no effect on the further volcanic activity of Etna. “The storm has no effect on the subsequent outbreak. There is no known interaction here,” DWD expert Altnao explains.

He predicts, however, that the weather will continue for the time being: “According to the current forecast, the decline will continue to increase until Friday and will take on tropical features.” Heavy rain is expected to continue on the Italian island of Sicily until Sunday. .

First report on Sunday, October 24, 2021 at 9:30 pm: Catania – Etna volcano erupts again on the Italian island of Sicily. The National Institute of Geophysics and Volcanology (INGV) announced Saturday (23.10.2021) that increased activity was measured in the early morning hours.

The images showed how lava and ash leaked from the crater on the southeast side. A plume of gray smoke rose far into the sky. There were initially no reports of major damage, and in some cases there were reports of ash fall.

Etna volcano in Italy: the mountain has been very active for months

A little less than a month later, she was working The southeast Etna crater erupted again*came, INGV wrote in a blog entry. This is the 52nd this year since February 16. After a few explosions, a cloud of smoke rose for kilometers into the sky and was pushed by the winds to the northeast as far as Calabria on the mainland. A resident south of Mount Etna told dpa that the outbreak was not strongly felt in her place of residence.

Etna, which is over 3,350 meters high, has been very active so far this year. Since mid-February, it has been exploding regularly, sometimes spectacularly. Satellite images revealed: Through the numerous outbreaks The Italian volcano has become bigger. *

Ash fall is often a problem for people in the area, and the airport in Catania at the foot of Mount Etna has been temporarily closed in the past because the runway was dirty. In September, the Sicilian government promised municipalities two million euros in ash damage aid.

On Saturday, the Coldiretti Agricultural Society spoke of the “nightmare” returning to the Sicilian fields. Ash causes damage to planted areas. There should be rules that protect the farmers inside. Field cleaning takes time, requires water and therefore a lot of work at barely reasonable costs.