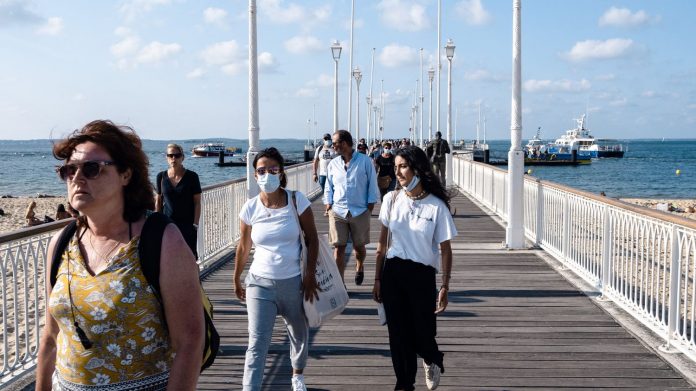 The prefecture’s press release specifies that compulsory mask-wearing does not apply in “Parks, gardens, landscapes and on the beaches” Nor in places that require a health permit.

The Gironde Prefecture announced, Tuesday, July 27, to new restrictions To combat the resurgence of Covid-19 cases in the department. The obligation to wear a mask, already in place since Tuesday on certain streets in Libourne, has been extended to other municipalities and “Areas of special population concentration” Starting on Wednesday, including downtown Bordeaux, Saint Emilion and the urban coastal areas of Soulac-sur-Mer and La Teste-de-Buch.

Mask is also mandatory again in “Markets, flea markets, queues, or the mass reception of minors” throughout the section. The prefecture’s press release specifies that compulsory mask-wearing does not apply in “Parks, gardens, landscapes and on the beaches” Nor in places that require a health permit.

The prefecture has also decided to ban the consumption of alcohol in public places (except for licensed outdoor stands) as well as its sale on public roads in the following municipalities: Bordeaux, Arcachon, Liège-Cap-Ferret, Soulac-sur-Mer, Lacanau, Hourtin, Carcans, Le Porge and La Teste-de- Buch, Andemos-les-Bains, Vendays-Montalivet, Libourne, and Saint-Emilion.

Eure-et-Loir’s monkeypox case: ‘Every doctor is supposed to be on guard’