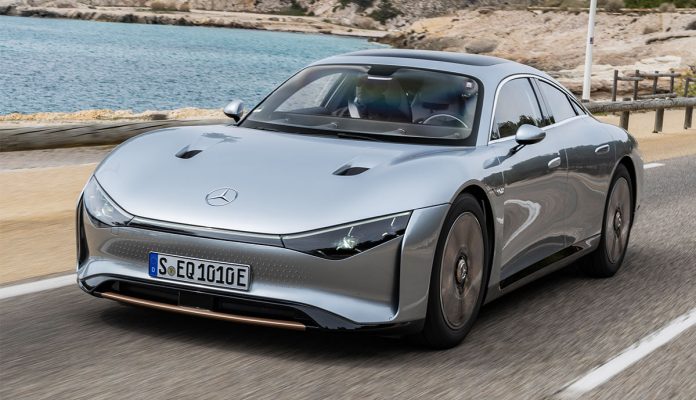 At the beginning of 2022, Mercedes-Benz introduced its Vision EQXX electric vehicle technology platform with the goal of driving 1,000 kilometers without intermediate charging. According to the Swabians, it has now been achieved: On its maiden voyage from Sindelfingen through the Swiss Alps and northern Italy to Cassis on the Côte d’Azur, the mid-range sedan covered more than 1,000 kilometers in real daily traffic on a single battery charge.

The Vision EQXX started in the cold and in the rain, drove at regular speeds and, according to Mercedes, was at times in the fast lane on German motorways at speeds up to 140 km/h. A total of 1,008 kilometers were covered in 12 hours and 2 minutes with an average speed of 87.4 km / h. The battery pack charge level on arrival was about 15 percent, and the remaining range was about 140 kilometers. “The average consumption exceeded all our requirements and was a record low of 8.7 kWh per 100 km,” says the automaker happily.

The long trip took place with a sealed charging socket and was accompanied by an expert from TÜV Süd. The 1,000 km mark has been broken by a new development approach to electric vehicles. “Thinking about efficiency outside of power and aerodynamics holistically down to the smallest detail, as well as working more closely than ever before across divisions and with external partners – the concept worked 100 percent,” said Swabians.

“We did it! We easily drove more than 1,000 km on a single battery charge and consumed only 8.7 kW / 100 km under real traffic conditions”, says CEO Ola Källenius. “The Vision EQXX is the most efficient Mercedes-Benz ever. The technology program behind it represents a milestone in the development of electric vehicles. It supports our strategic claim to ‘Leadership in Electricity’.”

The road trip to southern France showed that “efficiency is the new currency,” head of development Markus Schaeffer explains. “The success also speaks clearly to the new collaborative development process, which includes a great deal of knowledge from the Mercedes-AMG F1 team and its leading edge knowledge in the field of electric motors. The Vision EQXX is the result of a comprehensive technical program that provides a blueprint for the future of automotive engineering.”

According to Schäfer, several developments for the Vision EQXX have already been incorporated into production, some of which are also into the next generation of modular engineering of compact and mid-range vehicles planned for the mid-decade. “And the journey continues. With the Vision EQXX, we will continue to explore the limits of what is possible,” confirms the director.

According to Mercedes, the new 150 kW (204 hp) Vision EQXX driving concept delivers standard efficiency of 95 percent from battery to wheels. The battery pack with an energy density of around 400 W/L stores nearly 100 kWh of energy with 50 percent less volume and 30 percent less weight than the battery pack in the EQS luxury electric sedan, which has pioneered in this regard. Until now . 117 rooftop “ultra-thin” solar cells feed the battery system and provide an additional range of up to 25 kilometres. The e-car also sets new records for aerodynamics and weight reduction.

The Amazon settlement of Vorarlberg “from various …