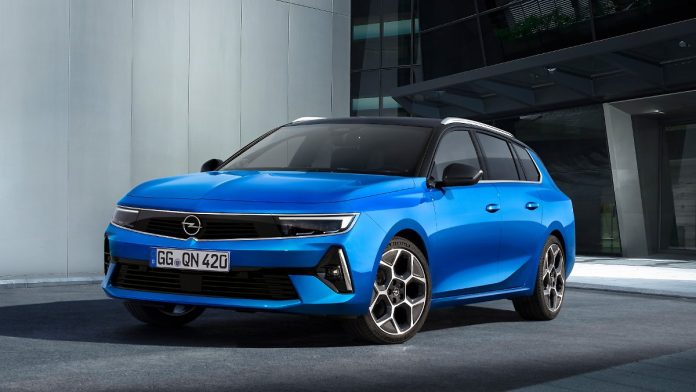 It was clear that there would also be a Sports Tourer after the new Opel Astra hatchback. Now the Rüsselsheim-based company has introduced the station wagon on a large scale for the first time. Although it’s reduced in length, it offers more cargo space and more room for second-row passengers.

In addition to the new Astra hatchback already available, Opel will put a station wagon version of its compact model in dealer showrooms this summer. The station wagon called the Sports Tourer starts at €23,565 and costs €1,100 more than a similar five-door car.

The Opel compact class and station wagon class have been a successful team for nearly 60 years. In 1963, Rüsselsheim added a caravan version to the Cadet A. Even when Kadett became the Astra in 1991, the station wagon remained a constant in the range. It wasn’t until 2010 that the station wagon designation, which seemed conservative from the company’s point of view, became obsolete, and since then Opel has dubbed it the Station Wagon Sports Tourer. About two-thirds of Astra customers recently chose a station wagon.

The new generation Astra station wagon now making its debut is the first generation offered by Opel as a member of the PSA and part of the Stellantis Group. At first glance, at least, you don’t notice that the Peugeot 308 SW is even close to the Astra Sports Tourer. The station wagon with flash carries the face of the new Vizor, stands out with its LED lights and is identical to the five-door to the B-pillar.

Compared to its predecessor, the Sports Tourer lost six centimeters in length. It extends to 4.64 metres. The wheelbase has increased by 5.7 cm. This creates good space for passengers. Not only is it roomy in the front, but two people can also sit comfortably in the rear. Despite the slightly sloping roofline, you don’t have to worry about tall passengers hair in the back.

The longer wheelbase also allows better use of the trunk. Luggage volume has increased by about 60 liters to 597 liters compared to the previous model. If you fold the backrest of the rear seat back, then 1634 liters of storage space is available. The rear seat, split at the factory in a 40:20:40 ratio, can now also be opened and folded down from the trunk. The 45-degree height-adjustable load floor can be locked so that the lower compartment can be loaded easily. Drivers of plug-in hybrid models have to make concessions. The loading volume here varies from 516 to 1553 liters. Depending on the engine, the maximum payload ranges from 453 (extra hybrid) to 497 (diesel) kg.

The interior is familiar from a hatchback. While testing the first seat in a vehicle with the highest level of equipment, the Ultimate cabin makes a high-quality impression. A hallmark of style here and there is the “clear display” made up of two screens enclosed in a nearly invisible glass bezel on the top version. There are also buttons or rocker switches to operate the air conditioning, ventilation or heated seats and steering wheel. The volume of the music system is controlled via a rotary knob. The head-up display can also be adjusted manually using the rotating knob on the armrest.

Also as a hybrid car

Under the hood are the known aggregates from the PSA rack. You can choose between a 1.2-liter three-cylinder turbocharged engine in expansion stages with 110 hp and 130 hp and a 1.5-liter diesel engine with 130 hp. The 130-horsepower engines can be combined with a manual transmission or an eight-speed automatic transmission. There is also an additional hybrid in the program. It combines a 1.6-liter petrol engine with 150 hp and an electric motor with 110 hp.

The system output is 180 horsepower, and the electric range is 60 kilometers. Another plug-in hybrid with 225 horsepower will follow during the year. In 2023, the Astra will also drive purely electric. Compared to the e-Corsa with its 136 hp electric motor and 50 or 75 kWh battery sizes, a modified technical layout can be used here for more range and performance.

In addition to the basic equipment, the Sports Tourer Edition, Elegance, GS Line and Ultimate levels are offered. Anyone who chooses the top of the line equipment (from €36,700, 130 hp petrol engine) has almost everything on-board Opel in the Astra shop in terms of amenities, including matrix light, navigation, head-up display, automatic air filter and AGR seats for driver and front passenger Plus a comprehensive range of assistance systems.

How to install a wall box at home