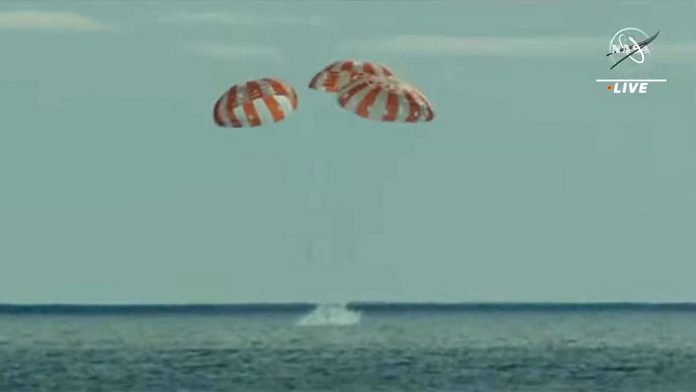 NASA reports a success: the unmanned Orion capsule – part of the Artemis lunar mission – has returned to Earth. The capsule landed in the Pacific Ocean off the coast of Mexico in the evening and is now being transported to the United States.

After several weeks in space, the unmanned Orion capsule of NASA’s Artemis 1 lunar mission has returned safely to Earth. It touched down in the Pacific Ocean off the coast of Mexico in the evening, as shown in live images from the US space agency NASA. With the help of specialists, divers and boats, the space capsule will now be brought to the port of San Diego. There it will be examined further. Scientists are particularly interested in whether the heat shield could withstand temperatures of around 2,800 degrees Celsius when it entered Earth’s atmosphere. This is a prerequisite for a manned lunar mission in the near future.

NASA is satisfied with the mission’s progress

The mission is an important step in returning humans to the moon. NASA Administrator Bill Nelson spoke about a historic day. “Historic moment and milestone in space travel,” German astronaut Alexander Gerst wrote on Twitter. “Mankind once again has a spacecraft that can carry humans beyond Earth’s orbit into space to explore the Moon and Mars.”

Artemis 1 was launched – after cost blows and repeated delays – on November 16 by a Space Launch System rocket from Cape Canaveral Space Station in the US state of Florida. Then all of the planned milestones for the mission were successfully completed over a period of about four weeks: flyby near the moon, entry into lunar orbit, swing out of lunar orbit, flyby of the lunar surface again—and finally a safe landing on Earth. The European Space Agency (ESA) and space agencies from several other countries are participating in Artemis.

After about four weeks in space, the space capsule returned safely to Earth.

Once again, a manned landing on the moon is planned

With the “Artemis” program, named after the Greek goddess of the moon, American astronauts are set to land on the moon again in the coming years, including a woman for the first time. The first manned flight (“Artemis 2”) around the Moon will be followed by another manned flight including a landing on the lunar surface (“Artemis 3”). NASA brought the last person to the Moon in 1972 with the Apollo 17 mission. Overall, the United States was the only country to date in which twelve astronauts landed on the Moon with the Apollo missions between 1969 and 1972.

Gudrun Engel, ARD Washington, on the return of the Orion space capsule from the Artemis lunar mission

Kenya Mass Extinction: The Terrible Cause of Dead Animals

Russia unveils its own space station