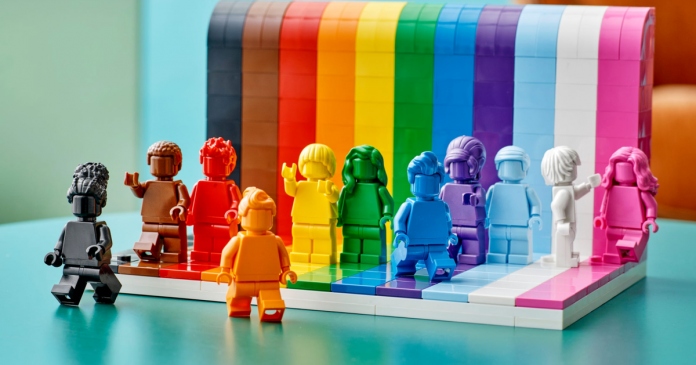 Copenhagen / Berlin – Now Lego terminal blocks are also diverse: the Danish company wants to celebrate the diversity of sexual orientation with a new set of characters. The colors were chosen based on the original rainbow flag, along with the light blue, white and pink, indicating the Transgender community, and the black and brown to include the different skin colors and backgrounds within the LGBTQIA + community.

Lego Designer Ashton: ‘A Manifesto of Love and Inclusion’

This should be a strong statement and a strong commitment by the Danish company: the acronym LGBTQIA + stands for LGBTQ +, and the “+” sign includes all other people who are outside of them. The asymmetric spectrum. The show set that is being presented right now is called “Everyone is Cool” and it consists of eleven monochrome characters with different hairstyles.

He said he wanted to create a group that “symbolizes inclusivity and celebrates everyone – regardless of how they are and who they love.” Lego designer Matthew Ashton. He noted that children are “more tolerant” regarding differences between people: “And I think this is something we can all learn from children … Because I belong to the LGBTQIA + community, it is imperative that I do a positive statement about love and inclusion.”

Lego plans to sell the new collection of 346 individual parts as of June 1. June is “Pride Month” for sexual minorities, as they celebrate their identity and demonstrate for their rights around the world. According to its own information, Lego also supports the British Models of the role of organizational diversityEducating children about inclusiveness. (With AFP)