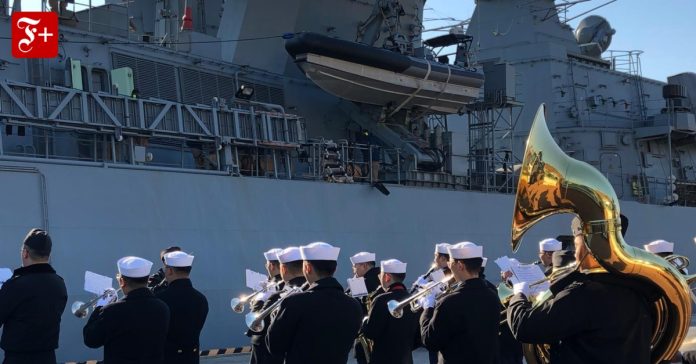 nAfter seven months on the high seas, the frigate “Bayern” is scheduled to return to Wilhelmshaven on Friday in hurricane weather. Behind the battleship lies an 80,000-kilometer journey to distant Tokyo, which not only experienced stormy moments in the North Sea. About two years ago, the federal government decided to step up international cooperation with the Indo-Pacific region and do more to promote freedom of sea lanes. The ship, with about 180 sailors on board, left Wilhelmshaven in August of last year, when Chancellor Angela Merkel was still in power (CDU).

The ship was due to fly the flag on its voyage to Japan, Australia, Singapore and India – in a region concerned about China’s imperial ambitions. To the astonishment of some friendly countries, a naval visit was also to take place in China. However, it failed due to Beijing’s refusal. The government there was previously formed by the then Minister of Defense Annegret Kramp-Karrenbauer (CDU) and Foreign Minister Heiko Maas (SPD) on the frigate’s peaceful intentions. The leader of the SPD’s parliamentary group, Rolf Mutzenich, initially accused Kramp-Karrenbauer of having a “Wilhelminist view of the world” because of the project. Subsequently, Mutzenich said it was good “to inform the foreign minister of the countries of the region of our intentions and our position. You do this carefully and not like Mrs. Kramp-Karrenbauer in public speeches that remind us of bad German times.” The CDU politician responded at the time: “It’s good to talk about our values, it’s better to do something concrete about it for him to do.”