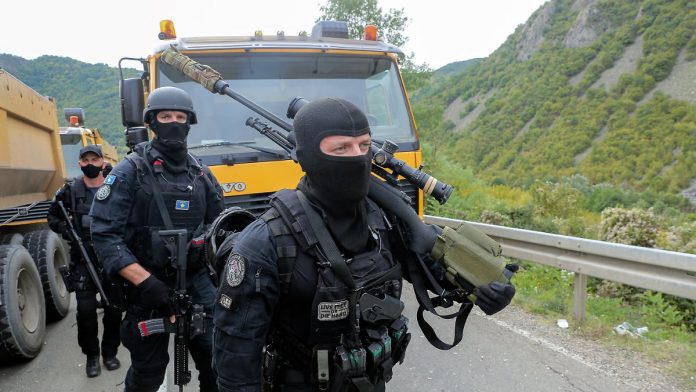 Serbia puts its forces on alert

After protests by the Serb minority, the Kosovo government sends elite units to the border. Belgrade feels provoked by this step and takes countermeasures.

Due to the stationing of special units of the Kosovo Police in the border area, which was considered a “provocation”, Serbia put its army on high alert. The Ministry of Defense in Belgrade stated that after the “provocation” by the Kosovo special forces, Serbian President Aleksandar Vucic issued an order to put some units of the Serbian army and police on high alert. The European Union and NATO called on both sides to exercise restraint.

The Kosovo Police Special Forces were previously deployed at two border crossings in the north of the country. The region is mostly home to members of the Serb ethnic minority who do not recognize the authority of the ethnic Albanian-led government in the capital, Pristina.

Police units were stationed in accordance with an order from the Kosovo government, according to which drivers with Serbian registration plates are required to put on temporary license plates when entering Kosovo. Hundreds of Serbs have protested this demand every day since the order was issued last Monday and have used vehicles to block traffic at border crossings.

Kosovo’s President, Fiusa Osmani, has cut short her visit to the United Nations in New York due to developments in her country. Albania expressed concern about the recent “escalation of the situation” and called on Serbia to withdraw its forces from the border area.

Josep Borrell, the European Union representative for foreign affairs, called on the two sides to calm the situation. The special police force must be withdrawn immediately. “Any other provocation or unilateral and uncoordinated action is unacceptable,” he said.

NATO Secretary General Jens Stoltenberg also called for moderation. “It is important that Belgrade and Pristina exercise restraint and resume dialogue,” he said on Twitter after a phone call with Serbian President and Kosovo Prime Minister Albin Kurti.