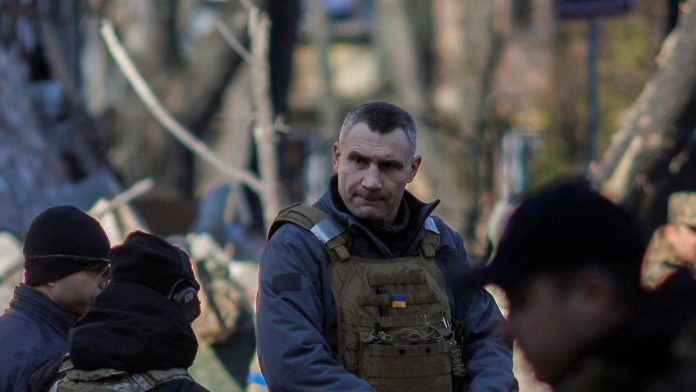 About two weeks ago, Russian forces withdrew from the Kyiv region. Attacks on the Ukrainian capital escalated again over the Easter holiday – out of revenge, the country’s leaders suspect. Mayor Klitschko appeals to residents to reach safety.

According to official information, the Ukrainian capital, Kyiv, is once again under intense Russian fire. Several explosions occurred in the Darnitsia region, as announced by Mayor Vitali Klitschko on Telegram. The quarter is located in the southeast of the capital. No information was available about potential victims. She added that rescue workers are on the scene.

Klitschko appealed to the population not to ignore the authorities’ air alert. Sirens sound several times a day in the Ukrainian capital. However, since the withdrawal of the Russian ground forces about two weeks ago, many people who fled the attacks in Kyiv have returned. Klitschko asked them to refrain from staying in safe places.

Explosions were heard in Kyiv on Friday, the likes of which have rarely been heard since Russian forces withdrew from the area. Moscow justifies the new bombing as retaliation for the alleged Ukrainian attacks on Russian soil. According to Ukrainian belief, Russia also wants to support Sink “Moskva” Revenge, flagship of the Black Sea Fleet.

“The attack on the cruiser Moskva not only injured the ship itself, but also the imperialist ambitions of the enemy,” a spokeswoman for Ukraine’s southern armed forces said on Friday. “We are all aware that we will not forgive this. We are aware that the attacks against us will increase and the enemy will take revenge.”

In keeping with this reading, the first Russian attacks in Kyiv were aimed at a factory that produced, among other things, anti-ship missiles. According to Moscow, it also wants to close Ukrainian command centers. Military buildings near the Ukrainian capital were hit by cruise missiles on Friday night. According to the Russian Ministry of Defense, the recent bombing destroyed two defense factories: an armored factory in Kyiv and a military repair facility in the southern city of Mykolaiv.

See also  Austria: Storming of the Chancellery in Vienna - Chancellor Sebastian Kurz is under suspicion. He strongly rejects these allegations. - Politics abroad