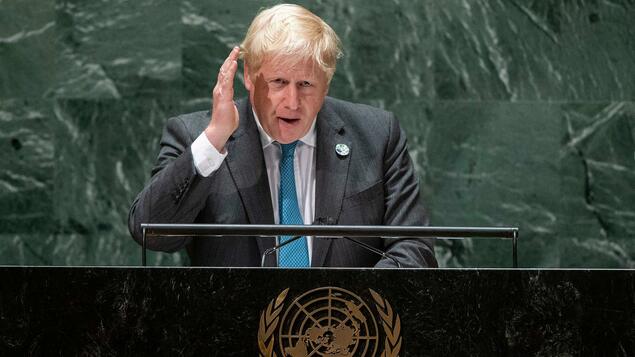 British Prime Minister Boris Johnson continued his tradition of making comedic appearances at the United Nations General Assembly with a speech on the fight against climate change. In light of the impending failure of the COP 26 climate conference in Glasgow in November, Johnson urged greater efforts in his speech at the United Nations general debate in New York on Wednesday night. He said, “We have great power to change things, or to change things for the better, and great power to save ourselves.”

Johnson asserted that climate action would not only help the planet, but also economies: “When Kermit the Frog sang ‘It’s not easy being green’ – do you remember? – I want you to know he was wrong. He was wrong.” Johnson said of the famous frog character of “The Puppet Show.” He added, “Apart from the fact that I think he was unnecessarily rude to Miss Peggy.”

In addition to planting trees, Johnson particularly praised wind energy – in his own way: “In the submerged meadows of the Doggerland between Great Britain and Holland in the North Sea, we have created great forests of beautiful wind turbines. Indeed, we produce so much offshore wind that I am considering changing My name is to “Boreas” Johnson in honor of the god of the north wind.”

In his speech, the British Prime Minister, notorious for his silly appearances, thanked Chinese President Xi Jinping for declaring that he would no longer export coal-fired power plants.

He also praised US President Joe Biden for promising billions of additional dollars in climate aid. Johnson also liked the new technology by which he could “take carbon dioxide up and put it in a chocolate cake”.

The Prime Minister also made it clear that the global path in the fight against global warming with an expected increase in temperature of 2.7 degrees by 2100 is a fatal path. “I hope Cop 26 becomes humanity’s 16th birthday where there is not much misery, but a party we choose to grow in,” Johnson said. This is why the “candles of a burning world” should be blown out at the climate conference. (dpa)

After Putin’s ruble decree: when gas transportation is prohibited according to...