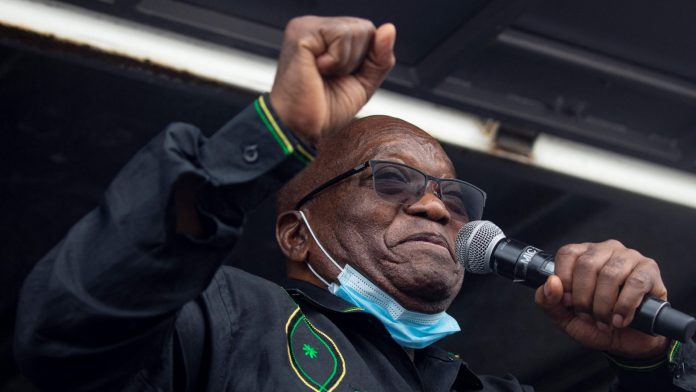 Former South African President Zuma has begun a 15-month prison sentence. Shortly before the deadline, the 79-year-old faces authorities who have convicted him of ignoring the judiciary in the course of a corruption investigation.

Former South African President Jacob Zuma, who was sentenced to 15 months in prison, has started his 15-month prison sentence. The 79-year-old presented himself to authorities in the late evening, shortly before the deadline, his foundation announced.

Zuma decided to follow the instructions of the judiciary and go to a prison in his home province of KwaZulu-Natal. At the end of June, the Constitutional Court sentenced the former president to 15 months in prison for ignoring the judiciary. Despite the summons to court, Zuma has repeatedly stayed away from anti-corruption commission hearings investigating corruption allegations from his nine-year tenure.

The judgment must be reviewed again

According to the ruling, Zuma should already begin his prison sentence on Sunday. But the ex-president refused, saying on Sunday he did not see the need “for me to go to jail today”.

If he had not gone to prison by midnight Wednesday, he would have been threatened with arrest by the police. Since Zuma cannot appeal the ruling, the former president filed an application to overturn the court’s decision on Friday. On Saturday, the court ruled to reconsider the ruling in the July 12 session.