Home Economy Jobs and profits at Tesla: Unequal wages? Swipe to pay at... 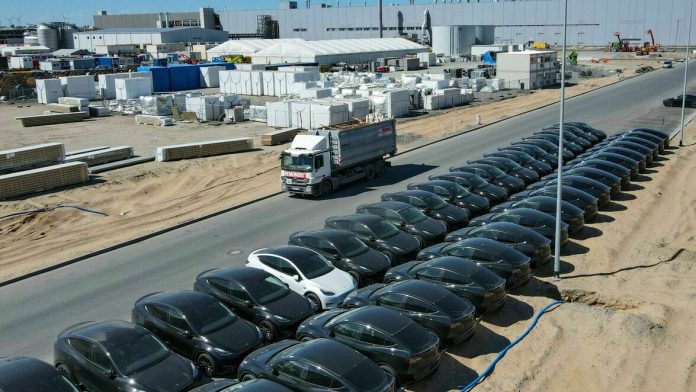 Tesla is an employer in the area that pays relatively well. According to the Employment Agency in Frankfurt (Oder), the starting wages for unskilled workers should be around €2,700 plus allowances. She added that Tesla is not bound by a tariff but pays nearly as much as the tariff.

Criticism of wages at the US automaker is now coming from IG Metall Berlin-Brandenburg. “For some time, we have been receiving increasing numbers of reports from Tesla colleagues complaining about extremely low and unequal wages at the Grünheide plant,” says Birgit Dietz, IG Metall area manager, according to a statement.

We know from union members that hiring new employees is not progressing at the required pace.

The union puts the difference between pay at Tesla and at collectively agreed car companies at about 20 percent for skilled workers. According to IG Metall, management of the plant in Grünheide is said to have already started offering more money to new employees. The union warns that this will damage the peace of the company in the long run.

Upon request, Tesla has not yet commented on IG Metall’s criticism. The company did not provide any information on the wages themselves. Tesla currently employs about 500 to 600 new employees per month, many of them from Berlin. The company is said to employ more than 4,000 people in total. Tesla confirmed this number. The company also has a business council, however, which cannot influence wage developments. This is a matter for Germany’s collective bargaining partners.
See also  Oldenburg: Cewe's Board of Trustees justifies separation from CEO Frej

IG Metall wants to demand a pay increase of more than six percent in its next pay round in the fall. The collective bargaining agreement aims to cover 2022 and 2023. If negotiations go well, IG Metall expects an outcome in November.

There is more about the Tesla Gigafactory in Grünheide near Berlin on the topic page.

Savings: Finally Term Deposit Interest Again: Which Bank Will You Get...