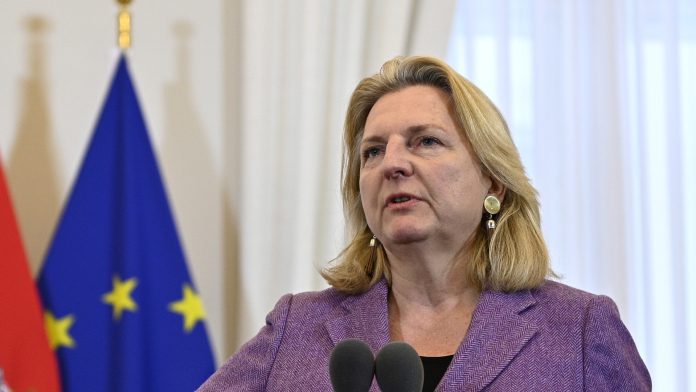 In Austria, an alleged network of agents close to the regime in Russia is under investigation. SWR– Research indicates that former Secretary of State Kneissl was privy to plans for the shadow intelligence service.

The photo went around the world: In August 2018, Karen Kneissl danced to it Russian President Putin’s wedding. Until recently, she was a member of the board of directors of the Russian energy company Rosneft.

The non-partisan politician, who was Austria’s foreign minister in the ÖVP government with the right-wing populist FPÖ party until 2019, has been heavily criticized for his closeness to Putin. To this day, she appears regularly as an interlocutor in Russia Today. Now there is a suspicion that she may have been directly involved in creating some kind of shadow secret service.

In the spring, it became known that a group led by the Secretary-General appointed to Kneisel at the Foreign Ministry, Johannes Petrlik, was planning to create a new intelligence service in 2018. Petrlik was to head the Foreign Ministry’s “new security department” consisting of five departments. Egisto O., for whom a job was planned in the department “Coordination Office”, was the driving force behind the planning.

At the request of SWR Counsel O. explained: “In general, one should ask oneself what rules of criminal law or internal guidelines are being broken, or whether it is reprehensible that improvements and the associated creation of a new administration are being considered and precautionary concepts are being considered. written down.”

suspected of spying for Russia

v. O. continues to investigate in Vienna on suspicion of spying for Russia. The German Federal Prosecutor was also interested in 2019 in the course of investigations entitled “Russian services” of O., such as SWR It was first reported in February 2021. It is also suspected that O. provided information to former Wirecard CEO Jean Marsalec, who is now a fugitive, in exchange for money.

Himself rejects all allegations through his attorney. According to the responsible law firm, the baseless allegations that lack any foundation whatsoever have been made for nearly five years now.

According to media reports, diplomat Petrlik, who was ambassador to Indonesia before returning to the Foreign Office, is said to have obtained the top-secret OPCW investigation report into the Novichok assassination attempt in Salisbury, UK from the Foreign Office in October 2018. The document contains A formula for nerve gas quickly got into the hands of Marsalik, who is believed to be hiding in Moscow today.

The budget for the protection of the constitution and military intelligence

Apparently, the Federal Office for the Protection of the Constitution and Counter-Terrorism (BVT) was also under consideration. In the investigation files that Dim SWR available, it says “that a person is preparing to undermine the (former) management team of the BVT in particular – and in this context, in the case of a BVT reform, to bring their own preferences in terms of personnel and organizational structure”. According to the investigation file, Egisto O. wrote to the former deputy of the FPÖ: “We will find a good solution for everyone who helped.”

Kneissl claims he knew nothing of these plans. She told the Washington Post in July. but then SWRResearch seems to have been aware of the plans of the new department. In the investigation documents that SWR Available, there is a screenshot with a message showing that then-Foreign Minister and Johannes Petrlik needed the organizational chart areas of responsibility at 10 am. The message does not reveal who wrote this message and to whom it went.

while paying or . And his comrades-in-arms went ahead with the planning of the new division, there was also regular contact with the former German intelligence coordinator under Chancellor Helmut Kohl, Bernd Schmidbauer. At the beginning of April 2018, O. Schmidbauer accompanied an interrogation at the Vienna Public Prosecutor’s Office, which dealt with a scandal in the BVT for the protection of the Constitution. On the same day, there was also a meeting with Peterlake, in which, according to Schmidbauer’s memories, Kneissl was present.

According to Schmidbauer, he knew that the new department to be created should “become a secret machine based on the German model”, “a counterweight to other services located in Austria”. However, he denied that he participated in the construction. The meeting was primarily about the Arab world.

Investigation documents also show that Schmidbauer also wanted to meet Herbert Kekl, the then-interior minister of the FPÖ party, in 2018, who had called for “understanding for Russia” in a television interview since the Russian invasion of Ukraine. Critics consider him and Karen Kneissl two important high-ranking officials of the right-wing populists sympathetic to the Putin regime who were interested in creating the secret service structure.

See also  A request from some EU countries: No more tigers as pets

Schmidbauer also met Jan Marsalek in 2018. According to Schmidbauer, it was about Nawichuk. Schmidbauer does not want to say who is said to have drawn his attention to Marsalek and the chemical warfare agent,

If Kneissl had already known of the plans to create a new intelligence service and if it were installed, it would have elevated her department to become a “security policy actor,” according to intelligence expert Thomas Riegler. “It could also have been an added bonus to their ability to work,” Rigler says. “Knowledge is power.” Questions SWR Kneissl, who now apparently lives in Lebanon, left the allegations unanswered.