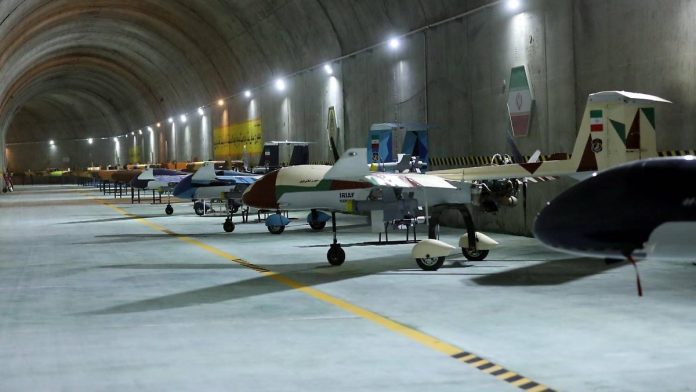 According to Iran, it has more than a hundred “combat, reconnaissance and attack drones” stationed at a secret base. Now state television is showing footage from the factory. It is said that the base is located hundreds of meters underground.

Iran says it has an underground air base for drones. Iranian state television showed footage of the base for the first time on Saturday: It said that more than a hundred “reconnaissance and combat and attack drones” were stationed at the base under the Sagros Mountains in the west of the country.

State TV reported that Iranian Chief of Staff Mohammad Bagheri and Army Commander Abd al-Rahim al-Moussawi visited the underground facility. The exact location of the drone base was not mentioned. The reporter said he flew there blindfolded from Kermanshah by helicopter for about 40 minutes. Moussawi said that the base “is located hundreds of meters deep.” According to state television, the flagship of the drone fleet is the “Kaman-22”, a drone with missiles that can fly at least 2,000 kilometers. In a speech to the leaders and engineers present, Bagheri said, according to Iran International, that with the increasing use of drones in the region, Iran must be vigilant and keep its equipment up-to-date.

The United States and Israel have accused Iran of supplying drones to its allies in the Middle East, including the Lebanese group Hezbollah, the government of Syrian President Bashar al-Assad and Houthi rebels in Yemen. The US Treasury imposed sanctions on the Iranian Revolutionary Guards’ drone program in October. Washington accused the elite force of being behind drone strikes on an oil refinery in Saudi Arabia in September 2019 and on a merchant ship off the coast of Oman, killing two crew members. Iran denied the allegations.