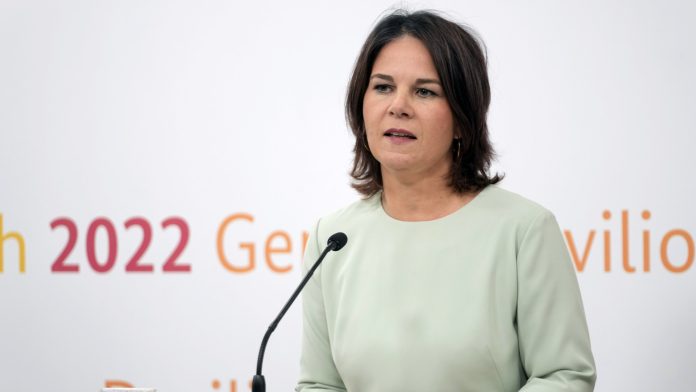 In the dispute over helping poor countries in the climate crisis, Foreign Minister Baerbock sees the responsibility of all countries with greenhouse gas emissions – including China. If the People’s Republic of China does not radically reduce its emissions, it will also have to pay for the damage.

German Foreign Minister Analina Baerbock called on all those responsible for causing climate change to contribute financially to poorer countries that suffer particularly from climate-related damage and its consequences “It’s true: we in Europe and North America, as industrialized countries, contribute to our efforts. Global Climate in Sharm El-Sheikh, Egypt, “Fortune is built on fossils responsible for climatic damage in the recent past as well as most of the present.”

Burbock added that all of today’s major emitters bear responsibility for tomorrow’s climate damage. Therefore, they must also make their contribution. “All nations can now show that they are ready for more ambition and more solidarity.”

“a matter of justice”

In an interview on the sidelines of the conference, Berbock had previously explained which country she was specifically targeting. Speaking to broadcasters RTL and NTV, she said: “If we now, as industrialized countries, of course have to pay for the damage of the past, and for the damage of the future, then this is just a matter of justice.” “But China will then also have to pay for future damages if it is not willing to radically reduce its emissions in the future.”

The Vice-President of the European Union Commission, Frans Timmermann, had made a similar statement before. By volume, the People’s Republic now emits most of the world’s greenhouse gases.

After the topic of “damage and loss” was included on the climate summit agenda for the first time this year, there is now disagreement over implementation. Developing countries are calling for a fund that will give them access to funds to respond to the devastation and disasters caused by global warming. China also supports this demand, but despite its massive greenhouse gas emissions and economic might, it does not see itself as a responsible donor.

Industrialized countries prefer a combination of measures, including insurance. However, Timmermans has now stated that the EU is moving away from its previous resistance to the creation of a fund or similar financing facilities. “We are now ready to discuss the facilities, but on a larger scale,” he said. Talk about a funding mosaic. If there is agreement, a decision on a facility can then be taken within a year and thus earlier than previously assumed.

Burbock also agreed to create a “new tool” on a broader basis. “We want this financing instrument,” the foreign minister said. However, it must be included in a “financial mosaic” consisting of various tools.

A solution to the issue of climate aid is not in sight until one day before the official closing of the World Climate Conference. “We don’t need to beat around the bush, ambitious outcomes at a climate conference have never been as challenging as they are today,” said Burbock. Germany is struggling to comply with the 1.5 degree target at the global climate conference. She said that the commitment of heads of state and government of the leading industrialized and emerging countries (Group of Twenty) to this goal is a positive commitment. However, words alone are no longer enough. Programs with clear objectives should be established for the coming years. Now it will be determined which countries will be the industrial powers of the future.

Environmental organizations and dozens of government representatives responded to sharp criticism of the main points of the final declaration of the World Climate Conference. The 20-page paper with many unresolved issues calls for phasing out climate-damaging coal, but not for abandoning oil and gas. Because of the outstanding issues, many expect an extension of the climate summit.

Burbock at the World Climate Conference: “These days the results weren’t that hard”

Israel: a Palestinian donate a kidney from a murdered Israeli

Chaos in the port of Dover: Britain blames France