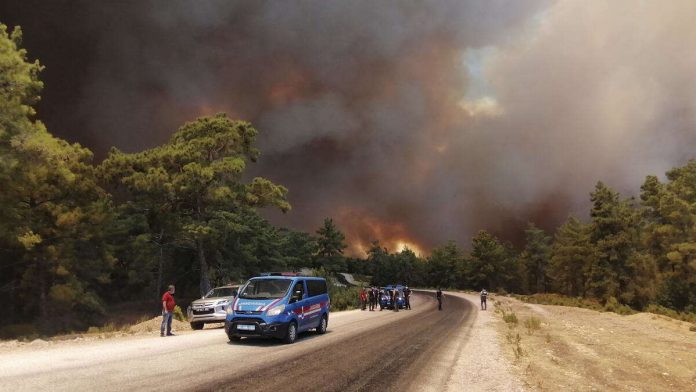 Heavy rain in the face of forest fires: the weather in northern and southern Europe can not be different from each other. And still – it could be more extreme.

MUNICH – For weeks, the weather in Northern and Southern Europe has been heading toward two different extremes: In Northern and Central Europe, entire regions, cities, and human life are utterly devastated by torrential rains and storms. Clean-up work in particularly affected German areas will continue for weeks. Not to mention people’s homes and livelihoods that can hardly be reconstructed so quickly.

But southern Europe hasn’t had it easy in the past few months, either: Spain has been battling a continuous heat wave and associated wildfires near Barcelona for weeks. On the Italian island of Sardinia, wildfires have destroyed thousands of hectares of land and caused residents and vacationers to flee. Similar scenes are taking place in Turkey. Here, too, strong forest fires broke out days ago, injuring several hundred people so far.

Now the next shock: an unprecedented heat wave is heading towards southern Europe

According to the current weather forecast, temperatures are expected to reach 44 degrees in parts of southern Europe in the coming days. The perceived temperature should then be 50 degrees or more. This heat can also be a problem for Southerners, who are accustomed to high temperatures. Numerous heat waves over the past 20 years have killed many people. According to meteorologists, this is partly due to the khamasin – the desert wind that blows hot, dry air from the south into the Mediterranean region.

This hot air initially spreads to popular holiday destinations. The heat is expected to rise in southern Italy, for example on the Adriatic and Greece, until it also reaches Albania, North Macedonia, Bulgaria, Romania and Turkey. Here temperatures are expected to rise to 44 degrees at the beginning of next week, then to 50 degrees during the week – heat that should also be possible in Italy and Greece. This may break the European heat record set in July 1977: at that time, the official temperature in Athens was 48.0 °C.

The weather service “Kachelmannwetter” now shares a photo of the devastating forecast on its Twitter page. The description says: “Yes, I have not yet seen such maps and one can only hope that in southern and southeastern Europe they will not turn out like this.” According to the US model in the map, which experts refer to here, temperatures are expected to reach 50 degrees in Italy on August 8, 2021.

Yes, I have not seen such maps yet and you can only hope that in southern and southeastern Europe they will not turn out like this. For Italy, up to 50 degrees will be counted regionally according to the American model on August 8, 2021! European record 48 degrees (Athens). https://t.co/UlzoVhjrIf / CG

Heat wave in Europe: still a glimmer of hope

But there is a small glimmer of hope on the horizon. Since this intense heat should only last for a week in the affected areas, the cold air masses coming from the north should help. It is not yet clear how far the heat will penetrate northern Europe by then and also reach Croatia. In addition, one always has to wait and see what exactly will happen to this long-term speculation. But one thing is for sure: it will be hot.