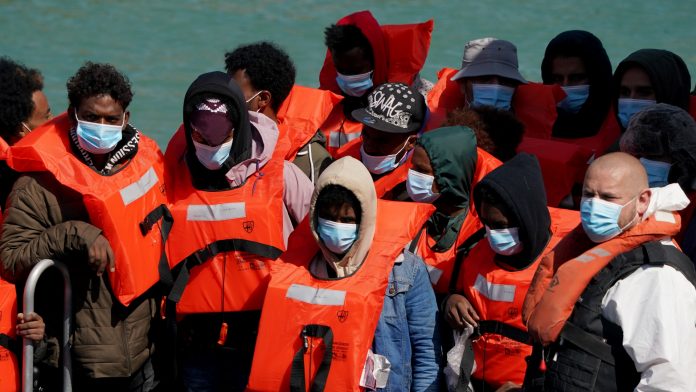 Refugees attempt to reach Great Britain via the English Channel. The British government wants to stop immigration – by imposing heavy penalties on smugglers and refugees.

You paddle. The boat doesn’t even have an engine. Five men give everything to cross the English Channel. The BBC released the photos this week. A reporter from the station was on a motorboat in the strait to conduct research. The reporter asks where did they come from? They answer: “Sudan.” The journalist hands them water and biscuits. The reporter said that help will come soon.

The number of people who came to England via the English Channel this week exceeds the values ​​for the whole of 2020. More than 8,400 people have already succeeded. This puts the Johnson administration under political pressure – particularly British Home Secretary Priti Patel. Because the government promised fewer immigrants.

63 million for the French coast guard

Immigration was a huge problem during the 2016 Brexit referendum. The Brexiteers, who are now in government, want to get things done. On Tuesday evening, Patel agreed with the French government in Paris that the Coast Guard would carry out more missions – it was said – taking action against “illegal immigration”. The British Home Office is paying France nearly 63 million euros for it.

Yesterday, Patel had to justify himself in the House of Commons Home Affairs Committee. Great Britain also financially supported France in 2020 – without any result. Tim Lawton, also a member of the Conservative Party, said that was ridiculous, but Priti Patel questioned on the panel. This is a mockery. Britain is giving the French more money so they can keep doing what they’re doing badly. This will not solve the problem. Lawton called for putting France under greater pressure to take action against smugglers and stop the inflatables, which has not actually worked so far.

Priti Patel defended her policy: the situation has changed, meanwhile smugglers no longer start from Calais alone, where France and England are so close. Meanwhile, the inflatable boats left the entire French coast. In addition, many refugees come from Belgium, the Netherlands and Germany, Patel said.

The UK government is also tightening several laws to tackle “illegal immigration”. Late Tuesday night, a majority in the House of Commons voted in favor of a legislative package. Refugees now face up to four years in prison for illegal border crossing. The smugglers face life imprisonment.

These are harsh prison sentences for people who come to Great Britain and go through horrible things, says Enver Solomon of the refugee council. The new laws only filled the prisons without actually solving the problems.

British government under pressure: More and more refugees are coming through the English Channel