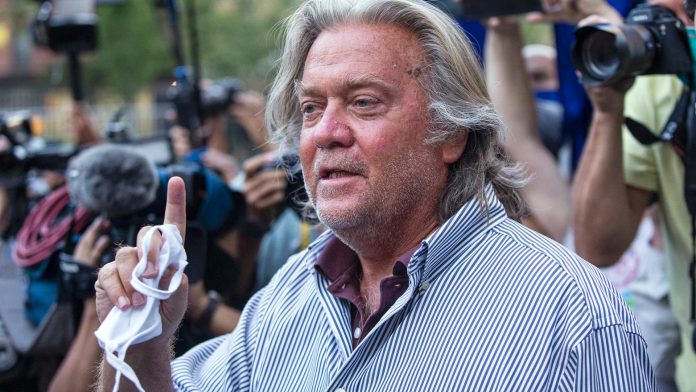 Steve Bannon was scheduled to testify before the US Congress regarding the January 6 attack on the Capitol. But the appropriate strategy did not appear despite the summons. Now he faces criminal consequences.

The US House of Representatives paved the way for criminal action against right-wing populist Steve Bannon for ignoring Congress. The background is a reassessment of the January 6 attack on the US Capitol. On Thursday, the House of Representatives voted to refer the case to the attorney general. 229 deputies voted in favor of it and 202 against it. Hardly any Republicans joined and voted for Joe Biden’s Democrats.

The commission of inquiry charged with investigating the attack had unanimously adopted a report on Tuesday that concluded Bannon had ignored Congress. This removed the first obstacle to bringing Bannon to justice. Now the Ministry of Justice has to deal with the case.

A US House of Representatives committee is investigating the background to the attack on the Capitol. Trump supporters storm the US Capitol in Washington on January 6. Five people, including a police officer, were killed. Bannon is suspected of having prior knowledge of plans for violent protests. The day before the storming of the Capitol, he said in his podcast, “Tomorrow all hell breaks loose.”

“He knew what was going to happen before it happened,” Republican Representative Liz Cheney said before the vote. She is one of two Republican members of the committee. “He’s a bogeyman for the Democratic Party,” complained Republican Jim Banks, a staunch supporter of Trump.

The House of Representatives, which is controlled by Democrats led by Biden, has formed a commission of inquiry to uncover the background to the storming of the Capitol Building. Among other things, former Republican staffers will be interviewed, as well as Bannon, Trump’s former chief of staff Mark Meadows.

Trump calls on those close to him to refuse to testify

But Trump demands that they refuse to testify. The former president is claiming so-called executive privilege, which would allow him to withhold certain information. Democrats argue that this privilege exists only for current presidents, not past presidents.

The now-adopted report says that even if Trump could obtain that privilege, he would not absolve Bannon of his duty to testify before the committee. Bannon’s refusal has no legal basis and violates legal provisions.

Trump has not conceded his electoral defeat against Biden to this day. The 75-year-old continues to spread the false claim that he was denied a second term through massive electoral fraud. The right-wing populist, still popular with the party base, repeatedly and publicly flirts with a possible candidacy for the 2024 presidential election.