Home World May 1 in Turkey: 160 protesters arrested in Istanbul 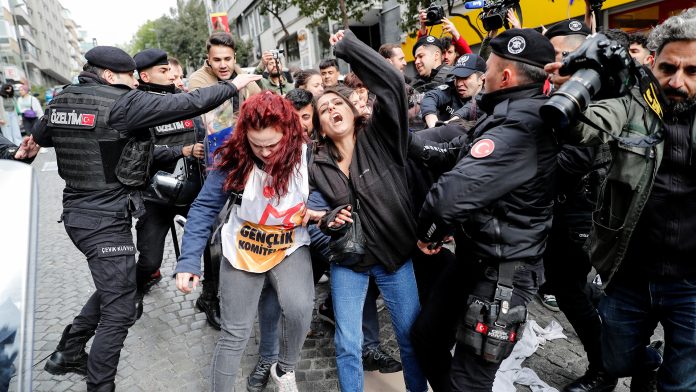 In Istanbul, the police arrested more than 160 demonstrators. She added that despite the warnings, they had taken part in an unauthorized protest. According to media reports, there were occasional clashes with the police.

According to official information, the Turkish police arrested 164 protesters in Istanbul. Despite the warnings, they participated in an unauthorized protest, and the Istanbul governor’s office justified the action.

According to media reports, there were occasional clashes with police when protesters tried to walk to the emblematic Taksim Square in the city center. Like every year, the authorities cordoned off access to the square over a wide area.

In Istanbul, clashes with police broke out when protesters tried to walk to Taksim Square in the city center.

Demonstrations in Ankara and Izmir

Meanwhile, on the Asian side of Istanbul, many people gathered to celebrate Labor Day, as evidenced by the photos. There were also demonstrations in the capital, Ankara, the coastal city of Izmir and other cities. The dominant theme was the economic crisis and inflation, which officially exceeded 60%.

Since the anti-government Gezi protests in 2013 The Turkish leadership will no longer allow May Day demonstrations in Taksim Square. The authorities only allowed union officials to lay a wreath there. The 2013 protests were initially directed against the development of Gezi Park in Taksim. It expanded to include nationwide demonstrations against the authoritarian policies of then Prime Minister and current President Recep Tayyip Erdogan. The government brutally suppressed the protests.

Taksim Square has a special significance for May Day celebrations in Turkey. In 1977, on Labor Day, snipers shot at a demonstration in which about 500,000 took part. At least 34 people died. To this day it is not clear who the perpetrators are.

164 were arrested on May 1st in Istanbul

The surgery took nine hours: a man plays the saxophone during...