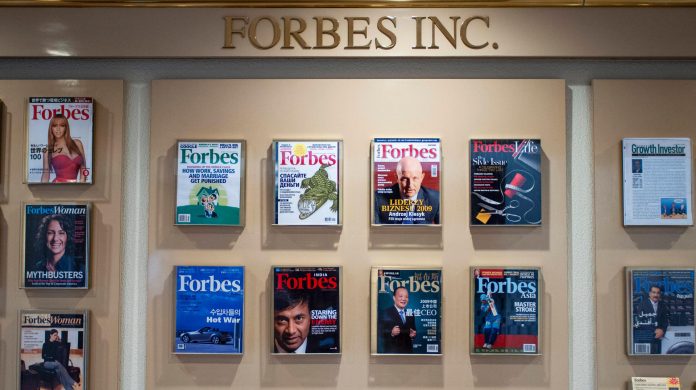 Forbes American media group is presented to the public. The company is best known for the magazine of the same name and its annual Rich List. The company is valued at $630 million.

Forbes is an American media group known for its traditional magazine of the same name. The group announced this on Thursday after the company raised $400 million (about 340 million euros) in capital from investors.

The company is valued at $630 million. The IPO is expected to be completed in the late fourth quarter of 2021 or early 2022.

So the Forbes IPO is part of a deal with the shell company Magnum Opus, which is funded by L2 Capital. The company was actually sold to an investment group founded by Hong Kong investor Tak Cheung Yam in 2014.

A magazine famous for the list of the rich

Forbes magazine, known for its rich list, was founded in 1917 by Scottish immigrant BC Forbes, and later run by his son Malcolm Forbes. Eventually, Steve Forbes, a former US presidential candidate, took over the management of the magazine. However, the digitization of the news business caused problems for the magazine.

According to Forbes, its website and event organization reaches more than 150 million people in 76 countries around the world. “It has been exciting to see the Forbes management team successfully digitize since we became involved,” Yam said. Now is the time to “continue the Forbes story.”

Through the IPO, Forbes has enough capital to “implement content strategy and platform design,” Forbes CEO Mike Federell said. This makes it possible to fully utilize the potential of the Forbes brand.