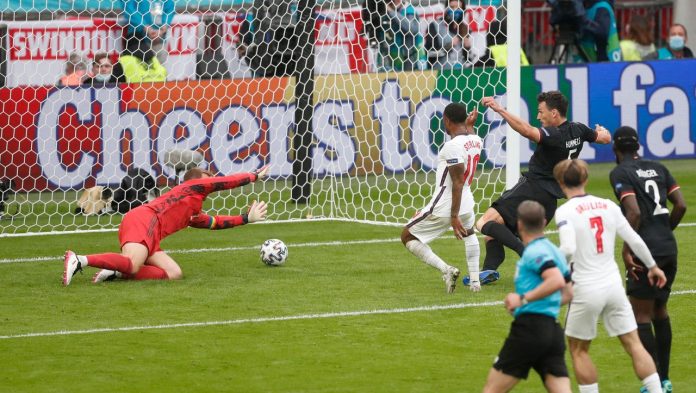 The German national football team lost the round of 16 in the European Championship to England 0: 2 (0: 0) and was eliminated from the tournament. At London’s Wembley Stadium, Raheem Sterling was the leading scorer (75th minute), and Harry Kane made it all clear (86th place).

The football evening began with the two teams kneeling, as the English and German teams wanted to put together a common sign against racism and diversity. After the start of the match, football rivalry took priority again – and the German Football Association got off to a better start: after a pass from Thomas Muller, Leon Goretzka ran towards the English goal, and Declan Rice got only the scorers. Hungary match shortly before his grip on the penalty area (8.). Rice saw the yellow card, the free kick did not cause any danger.

As a result, the English advanced in the match, keeping the ball in their ranks for longer, and reaching the first score with a long-range shot from Raheem Sterling, which put Manuel Neuer to the test (16). The German team survived the English urging stage unscathed, and the next good chance came to Timo Werner after a pass from Kai Havertz from close range. England goalkeeper Jordan Pickford made a safe save (32). Seconds before halftime, Mats Hummels saved DFB-Elf 0-0 when he knocked the ball off Harry Kane’s foot into his six-yard box (45+1).

The second half started with the German’s most dangerous shot on target so far: a powerful shot from Kai Havertz was likely to hit the English crossbar, while Pickford tipped the ball over the bar with his fingertips (48th place).

After that, opportunities on both sides became scarce. But the English took advantage of the next opportunity: Sterling hit the lead with his third goal in the tournament after a low cross from Luke Shaw. Muller missed a stand-alone counterattack in front of Pickford (81), before Kane headed from close range to the final score.

The match was Joachim Loew’s last match as a German coach: after 15 years, the reign of the 2014 world champion coach ended, and Hansi Flick inherited it. For England’s Gareth Southgate, the tournament continues: on Saturday (9 pm, TV: ARD or ZDF, live: MagentaTV, live tape: SPIEGEL.de), the winner of the Sweden-Ukraine match awaits.