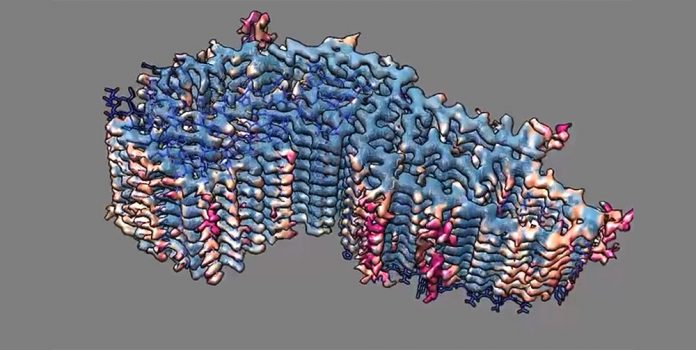 Killer images: For the first time, researchers have successfully mapped the structure of a disease-causing prion protein, down to nearly the atomic level. Images taken with cryogenic electron microscopy revealed, among other things, that the fibers of these denatured proteins consist of stacks of flat subunits. These “leaflets” of amino acid chains, in turn, show species-specific and possibly disease-specific differences, the team reported.

Unfolded prion proteins are the cause of deadly neurodegenerative diseases in humans and animals – from scrapie sheep disease to ‘mad cow disease’ mad cow disease Even Creutzfeldt-Jakob disease in humans. What they all have in common is that highly infectious prions quickly transfer their faulty conformation to healthy proteins, thus leading to prion accumulations that are fatal to brain cells. Moreover tau fibers in Alzheimer’s disease and those characteristic of Parkinson’s disease Alpha-synuclein deposits It is suspected to have a prion-like effect. To date, there is no antidote for prion diseases – they are inevitably fatal.

The exact structure of prions is hardly known until now

The problem: How the prion is organized in detail and how it causes other proteins to seize this misconfiguration has not yet been elucidated. “There was no data on the folding of monomers within infectious prion proteins, nor was there any knowledge of how different prions were structurally different,” Alison Krause of Case Western Reserve University and colleagues explain.

But now Krause and her colleagues have made a major breakthrough: for the first time, they mapped a disease-causing prion down to the atomic level and mapped its structure. To do this, they first isolated molecules of the hamster-adapted prion scrapie strain, then suddenly cooled them with liquid nitrogen and then exposed them to Cryo-Elektronenmikroskopie.

Images of thousands of prions revealed: the prion elongated fibers consist of countless identical, perfectly stacked subunits. Each of these monomers forms a “notch” of the elongated protein strand. The monomers at the ends of the fiber also serve as templates for the incorrect binding and conformation of other protein units.

Each prion monomer consists of twisted chains of amino acids, which are all located in one plane and are held together by bridge links. As a result, the secondary structure of these amino acid chains corresponds to a beta sheet – a flat, concertina-like folded disc. Here, the prion differs significantly from the original, properly folded proteins, which form the helix and remain isolated as monomers, the team explains.

Differences in attachments and endings

Prion structural details also provided the first clues as to why prion diseases are species-specific, and despite the high infectivity of these disease-causing proteins, there is rarely cross-species transmission. Comparison with the mouse prion variant showed that the structure of the two differed on cardinal points.

“The cross-section of the fibers shows clear differences at the ends of the fibers where the defect occurs,” Krause and colleagues say. “In addition, these prion versions present potential bonds with different side surfaces.” According to the scientists, these differences could also be behind the different neurological symptoms caused by different prions.

“The detailed structures of prions provide us with a new basis for understanding and treating these previously incurable diseases,” Krause says. “It is now easier to develop and test hypotheses about how prions turn into highly infectious and deadly protein structures.” (molecular cell, doi: 10.1016/j.molcel.2021.08.011)