Home World Fire brigades in constant use: hundreds of wildfires rage in Italy 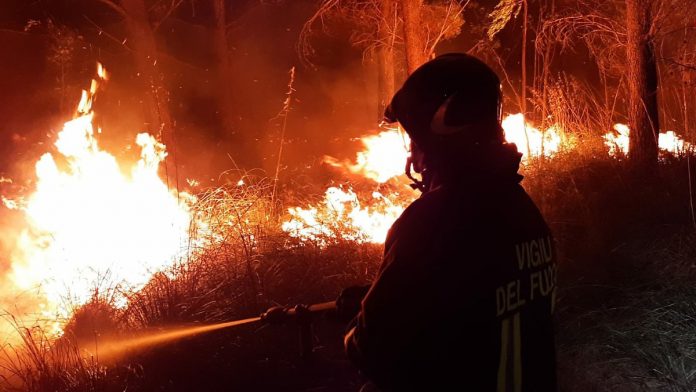 Fire brigade in continuous use

Hundreds of wildfires are raging in Italy

While northern Italy experiences torrential rains, emergency services in other parts of the country are battling numerous fires. In Sicily, they encounter a kilometer long fire. The mode supports drought, heat and wind.

In Italy, rescue workers continue to fight several wildfires across the country. The Civil Protection Authority said districts had called 34 times for firefighting planes. Inquiries came from Calabria in southern Italy, from Lazio – where the capital is Rome – and from the islands of Sicily and Sardinia. The authorities were unable to send planes to the three fires. There the fire brigades had to fight the fires on the ground. Most of the fires were caused by negligent or malicious behavior, the agency said.

Nationwide, the fire brigade reported 240 bushfires deployed in them. Flames have erupted on the tourist island of Sardinia since last weekend, causing destruction and massive damage amounting to millions. In the evening, local fire brigades reported new sources of fire in the province of Oristano, west of the island.

The fire brigade has reported dozens of missions in southern Italy. A camp has been evacuated from tents in Scanzano Jonico in the Basilicata region. In Agrigento, Sicily, firefighters faced a five-kilometre fire front, and in the area around Palermo, rescuers came out more than 40 times due to the fires.

The drought, heat and strong winds of the past few days have helped spread the flames. In contrast, it has looked quite different lately in northern Italy. Heavy rains caused floods and landslides there. The provinces around Lake Como in Lombardy were badly affected.