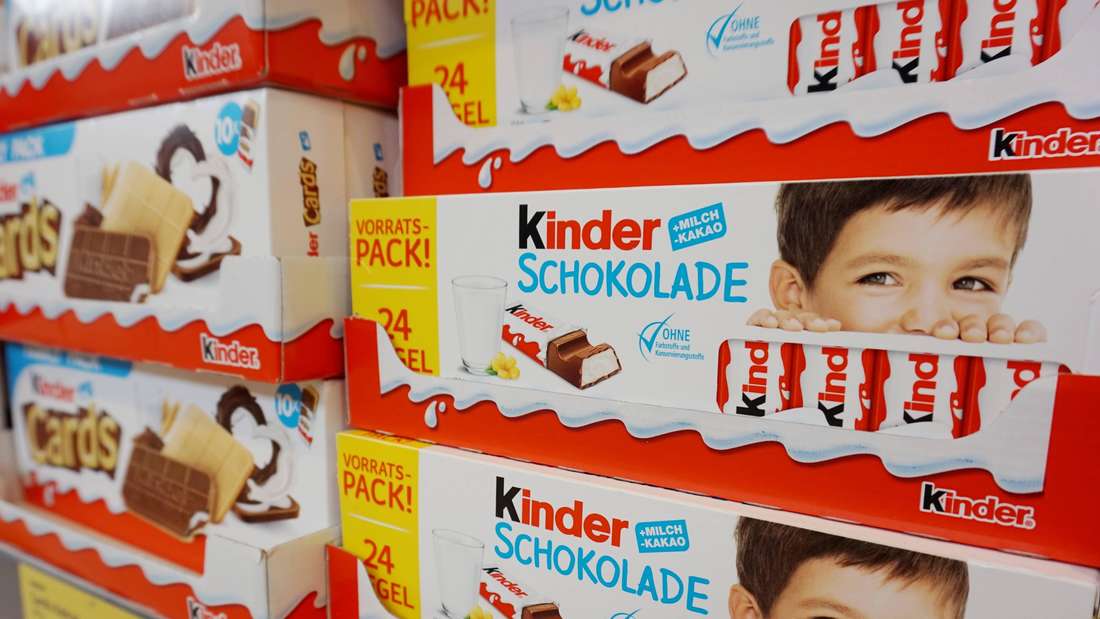 A number of Ferrero products in Rewe are also recalled due to the risk of salmonella infection. Whether this also affects children’s chocolate and children’s bars and what you need to do.

Cologne – After the big Ferrero recall in Rewe, consumers in Germany are asking a lot of questions. Especially the products that are affected. Because classic children’s chocolates and children’s bars in particular are very popular with many. Are batches in Rewe also affected by the risk of salmonella infection?

Salmonella risk in Ferrero: Rewe recall not for baby chocolate and baby bars

The salmonella scandal in Ferrero has escalated in recent days. After many other supermarkets in Germany, such as Netto, Edeka, Penny, Kaufland, Aldi, Lidl or Globus, Rewe now also has a big recall. But this does not affect every Ferrero product that is on the shelves of the Cologne-based food company. Among other things, children’s chocolate and children’s bars are not affected, a Ferrero spokeswoman explained when asked by 24RHEIN. “Children’s chocolate and bars are not made in the Arlon factory,” the spokeswoman said. Only the Belgian plant is affected by an outbreak of salmonella. So there is no risk with other “baby” products.

All “baby” products manufactured at the Arlon, Belgium factory are affected by the recall of Ferrero. Rewe supermarket has now launched a major recall and warns against consuming more than 20 items containing children’s chocolate.

Where can I find the EAN VB number?

EAN stands for “European Product Number” and is used to label products in retail. An EAN VB number is also the safest way to find out if the products you purchased have been affected by a withdrawal. The number is located below the bar code (or barcodes) and in most cases consists of 13 digits (8 digits for very small products). If the package contains the same EAN number specified when the product was recalled, the product should not be eaten under any circumstances and may be returned.

Rewe has stopped selling all products on the list and is asking all stores to remove Ferrero-related items from shelves. “Consumers who have purchased an affected product are advised not to consume it,” Ferrero said in a recall published by Rewe. Customers can also return the goods without a receipt. According to Ferrero Germany, only products manufactured in Arlon, Belgium have been affected by the salmonella outbreak.

It is now known that the salmonella invasion occurred on December 15, 2021 at the Ferrero factory in Arlon, Belgium. According to its own statements, Ferrero responded by withholding related products. In addition, the confectionery manufacturer is said to have replaced the filters in two raw material tanks where infestation was detected and increased product control. However, Ferrero is now under fire because the salmonella outbreak is currently taking on ever greater proportions.

The damaged Ferrero factory in Belgium has already been closed, but that’s not the end of the story. Because the Belgian public prosecutor is now investigating the confectionery giant. The Supervisory Authority of Afsca had already provisionally withdrawn Ferrero’s production license for the Arlon plant on Friday (April 8) until all food safety rules and requirements were met.

Recall due to salmonella risk: Ferrero expects losses at Easter

After the salmonella outbreak, the confectionery group now assumes that spring will be worse than usual in financial terms. “Of course, we expect losses in our Easter business,” Ferrero Germany said Monday evening (April 11). dpa-request with. However, the full treatment of the facts is the highest priority for us at the moment.” (OS with dpa) More news on the 24RHEIN homepage. Tip: Get informed daily about what’s happening at NRW – simply sign up for our free 24-hour newsletter.

Polestar, the premium electric brand from Volvo, has been introduced to...