Home Economy Exhibition for 9000 Curious: The Tesla Factory in Grünheide opens its doors 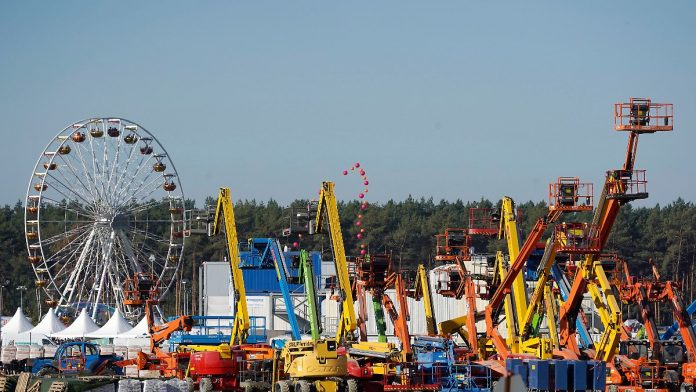 The Tesla factory in Grünheide opens its doors

Electronic car manufacturer Tesla makes an announcement in the Brandenburg town of Grünheide with a Ferris wheel and a whirlpool for the benefit of locals. A total of 9,000 curious people can make an impression of the first Tesla factory in Europe. The highly criticized car factory is an important industrial enterprise in East Germany.

A few weeks before the expected start of production, the American electric car manufacturer Tesla presented its first European factory to the public. In front of the car factory in Grünheide near Berlin, hundreds of people strolled at lunchtime in a kind of fairground with a ferris wheel and sausage stalls. Company founder Elon Musk’s performance was on the agenda for the afternoon.

Musk announced the plant in late 2019 and built it in less than two years. In the future, about 12,000 employees will build about 500,000 electric cars annually there. Musk plans to start production this year. A battery factory was built next to the car factory. Mask builds with early approvals. Final approval of the entire project is still pending. Critics complain that the industrial building is being built partly in the water protection zone.

And authorities allowed up to 9,000 people to attend the open house called “Country Fair” at the same time. Visitors were able to take a factory tour as well as test drive a Tesla Model Y, which will be produced in Grünheide. The police reported slow traffic on the access roads, but no major problems. Tesla asked visitors to come by train.

The car factory at the gates of Berlin is one of the most important industrial projects in East Germany. Musk originally estimated construction costs at 1.1 billion euros, but at the same time said the budget would be overrun. For the battery plant, Tesla has the potential for public financing, which, according to media reports, may also reach 1.1 billion euros.

EQS SUV: This Mercedes should make the electric giants immaculate