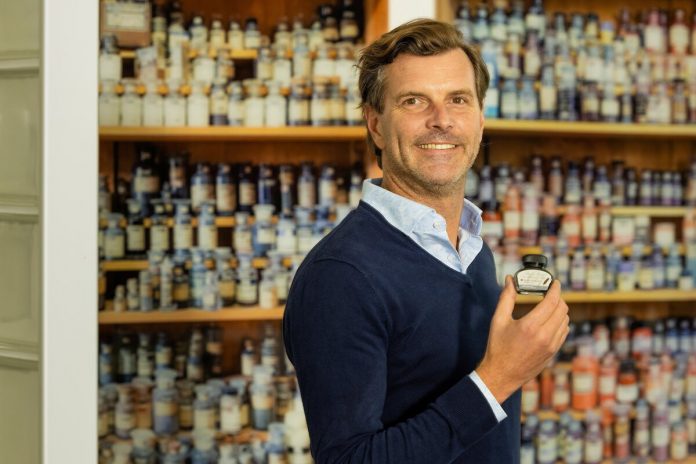 Colors flow like a wild river above the land. The colorful swirls seemed to spin and linger in abstract shapes like a rainbow that someone mixed up first and then stopped. At first glance, the process of painting is similar to watercolor, however it works without watercolor and not on plain paper.

The painting technique is called “alcohol ink painting” and it spread from the USA to Germany as a new trend for some time. The images are designed with alcohol ink. As the name suggests, it is made up largely of alcohol to which color pigments or dyes are added. Ink in small bottles. Drop by drop, colors land on the artificial surface. Gradients can be done with a hair dryer, and additional effects can be created using feathers or sponges. You can paint on metal, glass, porcelain, ceramic tile, Yupo special paper, or stone paper.

A liter consumes up to 100 different ink colors worldwide, 50 of which are currently supplied by Octopus in Dresden. Because developing, producing and selling inks and supplying all accessories is their business. Alexandra Paul and Louise Zschizchang, two young company employees who regularly use YouTube and Instagram to see who’s doing what with inks, have picked up on the American trend. So they quickly discover that thousands of people are passionate about Fluid Art and are following Youtubers who show how they create their artwork.

However, it was difficult or impossible to obtain inks for this in Germany. “It took a year and we were able to offer our own inks, which were developed specifically for this type of panel,” says Gunther Lange, Managing Director of Octopus Concept GmbH. In 2004 he discovered ink for himself, began building ink filling stations in Saxony and trading in liquid raw materials.

See also  This is behind the new packaging of "grass paper".

In 2011, after the bankruptcy of Baroque, the most famous Saxon factory in Radebeul, he began production himself and founded Octopus Fluids GmbH & Co. KG. Since then, not only has the company’s production facility been located on Hamburger Street in Dresden, but also its own laboratory.

“With three chemists and an ever-growing repertoire of equipment and tools, we have more opportunities to advance into other product segments for all things ink,” says Lange.

In addition to liquid ink, he is currently working on ink development projects for SLA 3D printing, polycarbonate inks, neon writing inks and printer inks for the latest models of Canon, Brother, Epson and HP printers, as well as expanding a range of alcohol inks to colorants for epoxy resins. “We are constantly pushing ourselves through innovations. I take into account the fact that something is going wrong or we are developing beyond the need in individual cases,” Lange says.

In his lab, for example, a special ink has recently been created and is only available from Octopus in Germany. Lange explains: “When I spoke to a sailor, he told me that on his yacht, when the barometer data was recorded on a strip of paper, the ink in the needle dries regularly in the needle. He asked if we had a solution for that. Our lab found one, even if we didn’t sell quantities Big of it, we still serve a good stature.”

His employees were also happy to implement the following idea, even though it was not expected to be a sales driver. “We were contacted in 2019 and participated in an international tender to print electoral ink for elections in Iraq,” says Gunter Lange. This ink is applied as a dye to the index finger of the voter. Fraud can be prevented in this way, because no one with a black toe is allowed to go to the polls again. “There are very special requirements for the ink chosen,” says Lange. “It should be gentle on the skin and at the same time, it can’t be washed off with your finger for 96 hours.”

In order to meet these characteristics, this special ink contains silver nitrate. “At that time, the chemist ran black fingers on his hands for several months to personally test the quality of the ink.

Iraq’s order consisted of 0.5 tons of purple ink in 5,300 bottles of 80 milliliters each. This was the first success, and now his company is one of the few in the world with the ink, which is especially popular in developing countries, in stock. The managing director notes that the average age of his 30 employees is 35. “At about 50, I feel kind of old,” Lange says. But he enjoys the curiosity of his people and his thirst for ideas.

The company now has more than 400 ink recipes. T-shirt printing inks, ink pads, styrofoam printing or for better prior dates printing on food packages and beer bottles awaiting delivery at the warehouse. However, Octopus achieves the greatest turnover by producing inks for refilling cartridges in printers as well as with R&D contracts from third-party companies. We have been growing continuously at an annual rate of 15 percent over the past few years. In 2020, our turnover increased to 4.5 million euros. This was 50 percent more than last year,” Lange says.

Due to delivery bottlenecks from mainly Asian manufacturers, German producers such as Dresden are becoming more important. “We also felt the need to secure the supply chain,” says Lange. Collaboration with Saxon writing instrument manufacturers, such as Diplomat, helped improve operations. The home office is becoming more and more important, and the creative activity in your four walls is on the rise. Online commerce is also playing an increasingly important role. 50 percent off

Sells merchandise on Amazon alone. “Our web store is growing all the time,” says Lange. In addition to printer inks, creative inks are a small but important part of production. In addition to alcohol ink paint products, this also includes ballpoint pen inks.

E-mobility is collapsing the power grid: a small town is now...