Home World Excavations in Morocco: Researchers find the oldest jewelry in the world 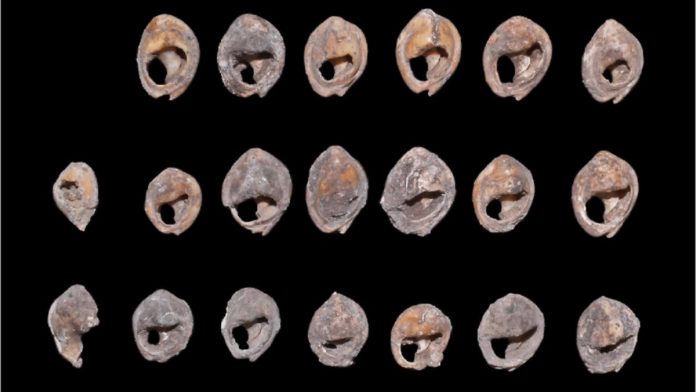 Mussels up to 150,000 years old were found near an African coastal town. These aren’t just beautiful pieces of jewelry, the discovery of the new cave has “a tremendous impact on human history,” explains archaeologist Bouzoukar.

Archaeologists in Morocco have discovered what they claim is the oldest jewelry ever found in the world. They are pierced shells that are up to 150,000 years old. The shells, believed to have been made into necklaces and bracelets, were found in the Bizmoun cave near the coastal city of Essaouira.

“This discovery has a great impact on human history,” said archaeologist Abdeljalil Bouzoukar. Because everything indicates that the owners use language. He dated the jewelry at 142,000 to 150,000 years old.

“They are symbolic things — and symbols, unlike tools, can only be conveyed through language,” Bouzoukar said. So the question arises whether the finding indicates the existence of a language that was used to communicate between groups or with members of other groups. Similar ornaments are found throughout the Middle East and Africa. They have been transported long distances and are between 35,000 and 135,000 years old.

Archaeologists made the discovery in September when they found tools for making clothes from bones dating back 120,000 years. They are the oldest tools ever found.