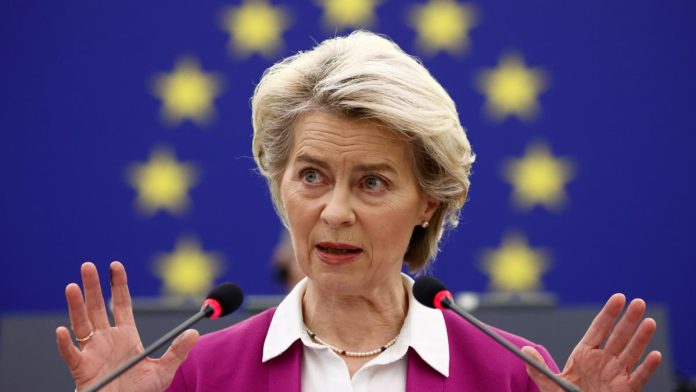 Those who earn from smuggling migrants should have more difficulty doing business in the EU in the future. The EU Commission plans to blacklist these companies. Commission President Ursula von der Leyen has announced that she will triple aid to protect the borders.

DrThe European Union Commission proposed, on Tuesday, a blacklist of travel companies that provide migrants from various crisis countries with all kinds of services, from visas to flights and hotels to taxis, in order to transport them to the western borders. Such companies may lose permission to provide their services, refuel or maintain their own transport in the EU.

For weeks, thousands of migrants have been trying to cross from Belarus across the external borders of the European Union into Poland, Lithuania and Latvia. Belarus Governor Alexander Lukashenko transports people from crisis areas to Minsk in order to smuggle them to the European Union. “In its strategy, Belarus relies in particular on the complicity of tour operators and their intermediaries,” European Commission President Ursula von der Leyen told the European Parliament.

According to EU Transport Commissioner Adina Valann, the blacklisting must be valid for one year and then must be extended. The proposal will now be discussed with Member States and the European Parliament. It may take months, if not more, for you to be accepted. Valian spoke of a “preventive” tool that we hope will never be used.

European Union Council President Charles Michel also outlined details of a new package of sanctions against Belarus launched by the foreign ministers of member states a good week ago. According to Michel, Belarusian airline Belavia will no longer be allowed to lease aircraft from airlines in the European Union.

Michel stressed that acceptance of the sanctions list was “imminent”. The new punitive measures are intended to affect airlines, travel agencies and other responsible parties involved in smuggling through Belarus. The list of those affected could be officially approved next week.

Commission President von der Leyen also announced that aid to affected EU countries such as Poland, Lithuania and Latvia to secure their borders would be tripled. You should get another 200 million euros. Czech President Milos Zeman and the governments of Hungary and Slovakia offered to send soldiers and police officers. No numbers were mentioned. Lithuania announced that 1,000 to 2,000 soldiers regularly supported border guards on the EU’s eastern external border with Belarus.

According to Polish government sources, Belarus is said to have returned hundreds of refugees from the Middle East to their countries of origin. After at least one flight last week, another plane with 118 migrants on board took off from Minsk on Monday, Polish news agency Stanislaw Zarin reported. This figure was confirmed by the Ministry of the Interior in Minsk.

“But this is not evidence that the Lukashenko regime is moving away from its strategic plan,” Zarin emphasized on TVP Info, which is close to the government. It would be premature to view this as a step toward appeasement. There are also indications that more migrants are being brought to the border.

See also  Antarctica: Little by little, the men ate all the sled dogs