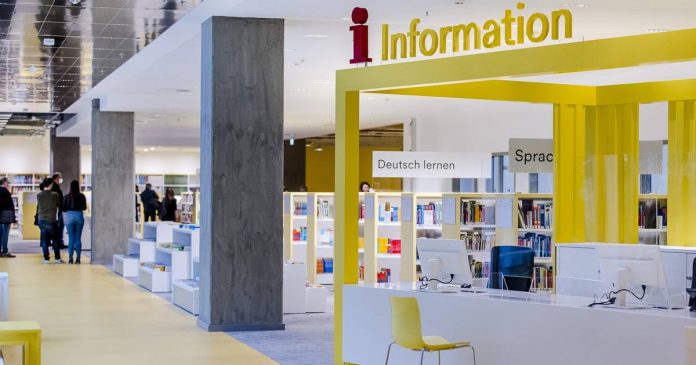 Düsseldorf In the converted former post office building KAP1 at the main train station, visitors were able to borrow books and films for the first time on Saturday and sample the many new offerings. Years of planning preceded the start.

After years of planning and building, the new Düsseldorf Central Library opened on Saturday. Just in time to start at 11am, early visitors flock to the new rooms in the KAP1 Building (Konrad-Adenauer-Platz 1) in front of the main station to check out all the innovations and borrow first books and other media. Paid Content The library uses the second and third floors and offers more than 300,000 media outlets on 8,000 square meters of public space. The Forum Free Theater (FFT), which has moved to the first floor, also showed off its new two-stage space in the morning, which will replace the previous two venues.

“Nice and bright here”, “many seats”, “great show for children”: most visitors were spontaneously impressed by the most striking features of the new library, which is only a few minutes’ walk from the former site across from the train station. “I haven’t been to the old library in Bertha-von-Stner-Platz in years, but today I was curious and really wanted to take a look,” said a woman from Düsseldorf.

workdays The new Central Library is open Monday through Friday from 9 a.m. to 9 p.m. Library staff are present from 10 a.m. to 7 p.m.

Within minutes, reading tables were filled with men and women scrolling through newspapers or putting down their laptops and getting down to work. The kids tried the climbing tree at the children’s library and picked up their first picture books from the shelves. “This is a successful project,” said Sophia Salta of Kaiserslautern, who studies libraries while studying, which is why she examines every detail with particular interest. “All ages are looked at here, and there’s a good system in place,” she says. Small breakdown at first: in the lending office, employees sometimes struggled with the fact that many media were not opened when borrowing from the machine – so many visitors sounded an alarm when leaving rooms and had to queue again.

The former post office building KAP1 has been extensively converted for new use. Project manager Manfred Crick was also responsible for the original building and was glad that it was now fulfilling a new purpose: “without having to demolish anything or produce rubble.” Nearly 19 million euros have been invested in the rooms.


Two hours before the start of the first opening day, the city hosted a reception, where Lord Mayor Stefan Keeler (CDU) highlighted the advantages of the building, and staff were delighted with the opening. “For the team, years of planning come to an end, months of moving, weeks of tense anticipation,” he said. In the new central library, there will still be many books that can be borrowed, but the focus will be more on people in the future.

At the time of the council’s decision to relocate in 2017, the CDU expressed serious doubts about the suitability of the building. Even in the traffic light collaboration that set the tone at Town Hall at the time, there were concerns until the last minute. In fact, not everything was as originally planned – so the theater museum did not move, remaining in the Hofgärtnerhaus. Instead, the NRW’s Bureau of Literature should move now, Hans-Georg Lohe, head of the culture department, confirmed Saturday.

Luohe was pleased to have completed the largest cultural construction project of his tenure and the “real increase in space” that accompanied it. He emphasized the central location and proximity to Schauspielhaus-Spielstätte Central: “It is important for Düsseldorf to have another cultural center in addition to the Ehrenhof and Grabbeplatz.” The Director of City Libraries, Norbert Kamp, assured his staff and he was able to freely design the project: “We had a clear political mandate to plan a modern library – and that was it.” The result was a place where you could feel comfortable and “being alone in public”. at least 74 hours per week; This significantly extends working hours.


In addition to its space for children and young adults, the state-of-the-art library includes 600 workstations, a “Xafé” library café, 15 event rooms, and the LibraryLab with digital displays from 3D printing to virtual reality. At this first level, his voice could be louder than many in the library are used to. On the second, quieter level, there are, among other things, non-fiction and specialized literature, a roof garden of about 300 square meters and nine learning boxes that can be reserved for focused work.

Here is the photo gallery: A tour of the new central library in Düsseldorf

It will likely be Amazon Prime Day earlier this year