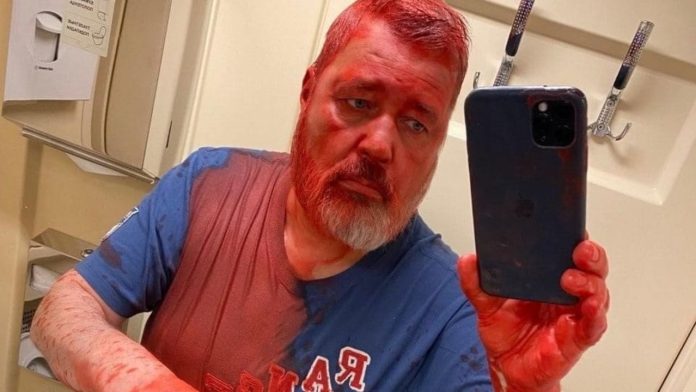 What a cowardly attack…

Russian journalist Dmitriy Morato, a 60-year-old Nobel Peace Prize winner, says he was attacked with a liquid by an unknown person. The newspaper said on Telegram that the editor-in-chief of the independent newspaper “Novaya Gazeta” was sprayed with red liquid on the train from Moscow to Samara (in southeast Russia) on Thursday.

“They poured oil paint with acetone into the cabin. “My eyes are burning terribly,” Muradov was quoted as saying in the statement. The unknown attacker shouted: Muradov, this is for our sons.

Two photographs, apparently taken by Muratov himself, accompanied the letter. Perhaps someone saw him in the train toilet mirror, his face, torso and arms covered in red paint. A second image showed a train compartment stained with a large amount of red liquid.

“Novaya Gazeta”, the most important independent newspaper in Russia, suspended publication at the end of March for the duration of the Russian military operation in Ukraine. The newspaper was repeatedly warned by the media organizer Roskomnadzor for its report on the military action.

Exiled journalists from the newspaper announced on Thursday the launch of a new newspaper called Novaya Gazeta. Europe” in several languages. This is not a branch of Novaya Gazeta, but an independent initiative.

Muratov was awarded the Nobel Peace Prize last year for his services to freedom of expression.

“Nothing is left”: missile attacks destroy the airport in Dnipro