Home World Detour through Germany: According to Gazprom, Poland will continue to buy Russian... 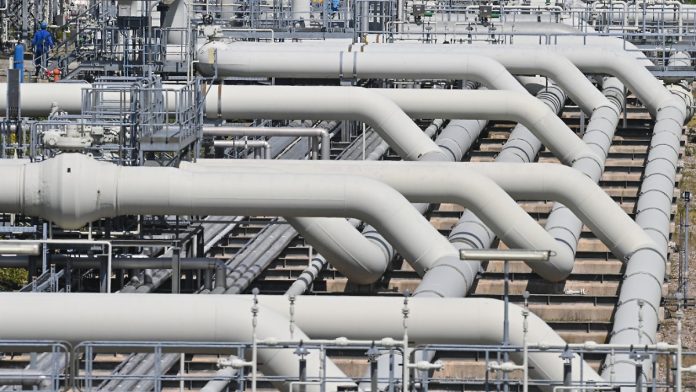 Detour across Germany
According to Gazprom, Poland will continue to buy Russian gas

Because Poland does not pay in rubles on time, Russia stops gas supplies. According to the energy company Gazprom, the country still receives Russian gas – via Germany. Meanwhile, the EU Commission clarified: the ruble exchange is a matter for Russia.

Despite halting direct deliveries, Poland continues to buy Russian gas — now via Germany, according to energy giant Gazprom. “It has been officially announced that Russian gas is no longer needed and will not be purchased. But in reality this is not the case,” Russia’s Interfax news agency quoted Gazprom spokesman Sergei Kupriyanov as saying. According to Kupriyanov, about 30 million cubic meters of gas flows from Germany to Poland daily through the Yamal-Europe pipeline.

Gazprom confirmed on Wednesday that it would not supply gas to Poland and Bulgaria. The Russian state-owned company justified the suspension of deliveries by saying that gas companies in both countries did not pay in rubles on time. On the other hand, Sofia and Warsaw confirmed that they had fulfilled their payment obligations. Polish Prime Minister Mateusz Morawiecki spoke of a “direct attack” on his country. At the same time, he stressed that Poland has sufficient gas supplies.

At the end of March, Kremlin President Vladimir Putin demanded that Western countries open accounts with Gazprombank from April 1 in order to pay for Russian gas supplies. Otherwise, deliveries to “unfriendly” countries will stop. According to a decree signed by Putin, bill amounts in the Russian account can still be paid in euros or dollars. Gazprombank converts money into rubles and transfers the amount in Russian currency to Gazprom. Putin threatened that if payments were not made, deliveries would be halted.

What the Russians do with the money is up to them.

Meanwhile, the European Commission has clarified the regulations for payment in rubles that Russia requires for gas delivery. European Commission officials said that companies that opened a bank account in Russia at Moscow’s request and continued to pay in euros did not violate EU sanctions against Russia. “What the Russians do with the money after that is up to them,” said one official.

However, the EU Commission does not consider it acceptable that the purchase by Russia should not be considered complete until the money has been converted into rubles. “It would be a violation of sanctions for a company to accept the opening of a second account to meet the demands,” an EU official said. During the exchange of money in rubles in the second account, the money is in the hands of the Central Bank of Russia, which is punishable by the European Union. Thus the regulation states that EU companies cannot be formally held responsible for the ruble exchange – but it does not prevent Russia from exchanging money afterwards.

‘Dangerous trend’: WHO warns against unauthorized mixing of vaccines