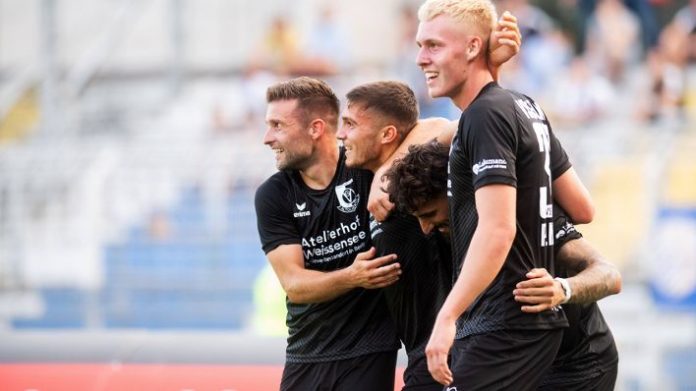 The second round of the regional league Nordost began with 14 goals in four matches. VSG Altglienicke won the first match at Carl Zeiss Jena 2-1. Both teams were selected as promotion candidates by the league’s coaches before the start of the season.

At the Ernst Abbey Sports Arena in Jena, things started to work out only in the second half. Midfielder Orhan Yildirim scored (28) in the 54th minute to give Karsten Hein’s team the lead. And his neighbor Berk Enlar (21) increased it to 2-0 in the 85th minute. Then Jena scored only a goal from Vassilius Dididis (21) in the second minute of stoppage time.

But in the duel between Tennis Borussia Berlin and Union Fürstenwalde, the home team won. After hits from Sebastian Hook (37th minute), Wilfried Siakam Chocoten (70) and Robin Travassos (88), “Filchin” won 3-1 when Emeka Odoah (39) scored. There was already excitement in the lead-up to the game after TeBe announced that it had received a T-shirt ban that was actually intended.

SV Babelsberg 03 also came back with a home win for the opening round defeat (0:2 at newly promoted Tasmania Berlin). Filmstädter beat Chemnitzer 2-1. The best player was midfielder Sven Riemann, who scored both goals after a 1-0 loss by Kevin Freiberger (63th place). The winning goal fell only in the second minute of stoppage time.

The match day was concluded with an away win for Berliner AK at VFB Auerbach. Nader Al-Jendawi (12), Lucas Lemmel (45) and Abu Bakr Karkbo (90 +1) scored the goals of the Berlin team. Auerbach’s temporary compensation was accomplished by Alexander Guzelevs (18th).

With success, BAK has taken the lead in the table at Regionalliga Nordost for the time being, followed by VSG Altglienicke in second place. Union Fürstenwalde, Tennis Borussia Berlin and SV Babelsberg 03 are ranked eighth and ninth. The remaining matches from Round Two will be played on Wednesday, July 28th at 7pm.

The best Turkish club wants to get a former professional player...