Home World COP27: von der Leyen wants to do everything ‘to keep 1.5 degrees... 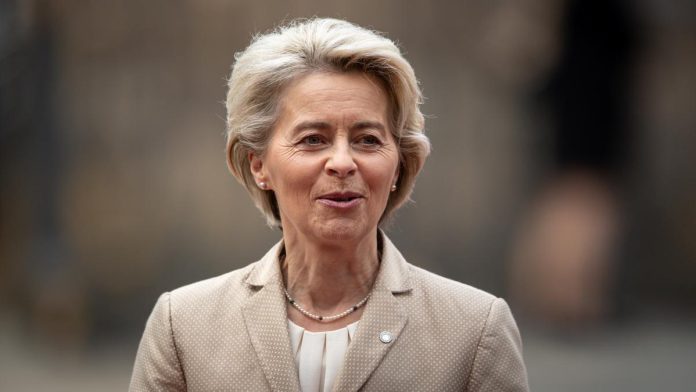 BAt the COP27 global climate conference, discussions at the highest political level on the next steps in the fight against global warming will begin on Monday. Addresses are expected from Federal Chancellor Olaf Schultz and dozens of other heads of state and government – including from countries such as Kenya or Niger, which are particularly vulnerable to climate-related changes and extreme weather events. New British Prime Minister Rishi Sunak and US President Joe Biden are expected to attend the conference.

Heads of state and government want to discuss topics such as water, food safety or green hydrogen in parallel talks, so-called round tables, by Tuesday. About 45,000 participants were registered for the conference, mostly as delegates from countries. In Sharm el-Sheikh on the Red Sea, representatives from nearly 200 countries will spend two weeks discussing how to intensify the fight against global warming.

Time is of the essence, according to a World Weather Organization (WMO) report presented Sunday. Accordingly, the past eight years indicate the warmest records. The average global temperature was recently estimated to be about 1.15 degrees above the pre-industrial average. According to the World Meteorological Organization (WMO), the concentration of the two most important greenhouse gases – carbon dioxide (CO₂), methane (CH4) and nitrous oxide (N2O) – reached a new high in 2021, and the increase in methane is greater than ever. According to climate researchers, global warming must be stopped at 1.5 degrees to avoid exceeding dangerous tipping points.

At the start of the COP27 global climate conference, EU Commission President Ursula von der Leyen described climate change as the biggest challenge and committed to a 1.5 degree target. “We face many challenges, but climate change is the biggest,” the German politician wrote on Twitter on Monday. COP27 is all about keeping promises made. “We must do everything we can to keep 1.5 degrees within reach.”

At previous UN climate conferences, the Federal Environment Ministry has always set the tone on the German side. Meanwhile, climate protection is officially a top priority in many ministries. German Foreign Minister Annalena Barbock (the Green Party) is in charge of the negotiations at the international level. In addition to these two departments, the Ministries of Economy and Climate Protection and Development are directly involved in the conference held in Sharm El Sheikh, Egypt, as well as Olaf Schulz at the outset.

Foreign Minister Barbuk will officially represent Germany at the ministerial consultations in Sharm el-Sheikh and will speak on behalf of the federal government there in the so-called ministerial segment from 16 November. Secretary of State Jennifer Morgan is already in Sharm el-Sheikh as the German government’s international climate protection officer. The former Greenpeace president is also in good contact with experts from science and societies on the subject. Secretary of State for Europe Anna Luhrmann (The Greens) is also on site on occasion.

Chancellor Olaf Schulz (Social Democratic Party) will participate as German representative on Monday and Tuesday in the so-called high-level segment of heads of state and government, which aims to give the climate conference the necessary impetus from the start. For Schulze, this could be an opportunity to polish the image he once developed during the campaign trail as a “climate consultant”, which environmental organizations have gone largely unnoticed of late. And they criticize the fact that, under the impression of an energy crisis for Schultz, climate-destroying fossil fuels are back in the spotlight once again.

Minister of Economy and Climate Protection Robert Habeck (the Greens) is primarily responsible in the Cabinet for the climate-friendly transformation of the domestic economy, but also for energy security and foreign trade. This means that the green politician had to campaign for fossil gas supplies in Qatar in the spring to offset the loss of imports from Russia.

In Sharm El Sheikh, the Economics Department is represented by Parliamentary Minister of State Stefan Wenzel (The Greens). Like Habeck, he still sees fossils as only a temporary solution until sufficient renewable energies and green hydrogen are available.

At the “African” Climate Protection Conference in Egypt in particular, financial support for climate protection and adaptation in developing countries will be a major focus. This is the responsibility of Federal Development Minister Svenja Schulz (SPD), who will also take part in the conference from November 13. In addition, the former environment minister is likely to visit climate protection and adaptation projects in Egypt.

The Development Department is also the main consignee of financial requests from the global south to industrialized countries. Although Germany is involved here in large quantities, the planned growth is currently faltering.

With the onset of the Traffic Lights Alliance, environmental management had to abandon the core competencies in climate policy. Minister Steffi Lemke (The Greens), who will be in Sharm El-Sheikh from 15 November, remains responsible for so-called natural climate protection, such as preserving or rehabilitating forests and swamps to store carbon dioxide.

There are many references to the upcoming United Nations Conference on Biodiversity in Canada in December. Scientists repeatedly assert that threats to climate and biodiversity can only be solved together.

Other federal ministries are also responsible for implementing climate protection measures in Germany, Europe and internationally, notably the agriculture, transport and construction departments as well as the cross-divisional finance department. Minister of Agriculture Jim Ozdemir (Gron) He wants to be in Sharm El Sheikh for a short time on Saturday.

France, Spain and Sardinia: forest fires in the Mediterranean – hundreds...