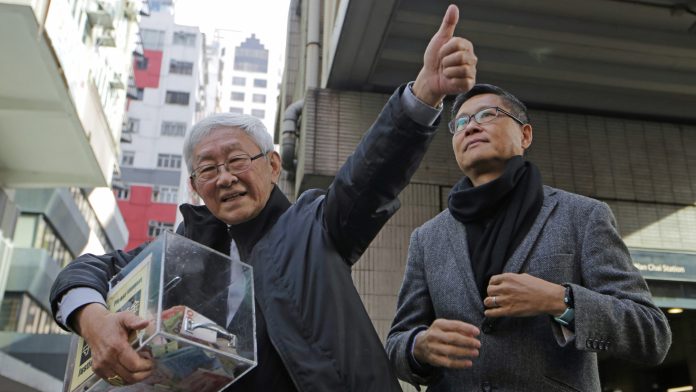 Former Hong Kong Archbishop Zen and other members of the pro-democracy movement have been arrested under the controversial “security law”. The Vatican expressed concern. Zain has since been released on bail.

The three were among five trustees of a relief fund set up to provide financial support to activists involved in the 2019 anti-government protests in Hong Kong. The UK-based human rights organization Hong Kong Watch said the fund closed in 2021.

Police said two men and two women, aged between 45 and 90, were arrested on charges of “conspiring to cooperate with foreign forces to endanger national security.” They will be released on bail, but their travel documents will be confiscated.

Media reports saw Zain waving to reporters as they walked out of the police station.

They are also said to have been involved as trustees in managing the fund that funds legal aid for people who took part in the pro-democracy protests in Hong Kong two years ago. In the summer of 2020, Beijing passed a draconian “National Security Law” for its Hong Kong Special Administrative Region, which severely restricts residents’ political rights. Since then, many opposition supporters have been arrested, withdrawn from politics or have fled abroad.

Critics of the Chinese leadership

Cardinal Zen is a fierce critic of China and has strongly condemned the 2018 treaty between the Vatican and the People’s Republic on the appointment of the country’s Catholic bishops as a sale to the secret Chinese Church. For decades, the Chinese Church has been divided into the so-called National Assembly, loyal to the state, and an underground church.

Zen, Bishop of Hong Kong from 2002 to 2009, is one of the most influential representatives of the Catholic Church in Asia regarding church policies. Long after his tenure, the Salesian monk Don Bosco was one of the most prominent critics of the communist leadership in Beijing and its human rights and religious policies. In an interview with the Kuwait News Agency in 2018, he said, “Unbelievable. How can the Vatican place hopes on such a government?” He had always feared that the Holy See would allow the government in Beijing to dictate its actions.

Anxiety in the Vatican

In Rome, the news of the 90-year-old’s arrest caused great concern. “The Holy See has been concerned about the arrest of Cardinal Zin and is following developments with the utmost interest,” Vatican spokesman Matteo Bruni said. And the White House in Washington, in a statement, called for the “immediate release” of the “detainees and those unjustly accused.”

Human Rights Watch described the arrests as “shocking.” “The arrest of a 90-year-old cardinal for his peaceful activities represents a shocking new low for Hong Kong and illustrates the free collapse of human rights in the city over the past two years,” Wang, a staffer at Human Rights Watch, told the Hong Kong Free Press. outlet. “The arrests, which followed the Chinese government’s appointment of former security chief John Lee as head of government in the city, are an ominous sign that the crackdown in Hong Kong will escalate,” she said.

The former security chief is the new prime minister

The former security minister, who is loyal to Beijing, was appointed as the new head of the Hong Kong government at the weekend. A committee voted for Lee with 99 percent of the vote, and there was no opposing candidate. The 64-year-old played a key role in the crackdown on the Hong Kong pro-democracy movement that mobilized millions in 2019.

“I realize I will need time to persuade the population,” he told me after his election. “But I will do it through work.” Now that the authorities have “restored order after chaos”, his goal is to create a Hong Kong “full of hope, opportunity and harmony”.

Since the introduction of the so-called “Security Law” by China at the end of June 2020, civil liberties, freedom of the press and the rule of law have been suppressed in China’s Hong Kong Special Administrative Region. Religious freedom is also under increasing pressure from the pro-China leadership.

In June 2021, pro-China activists targeted services in seven Catholic churches on the anniversary of the Tiananmen Square massacre. They put up signs in front of churches reading “malicious cult” and depicted Cardinal Zen as a demon with horns.