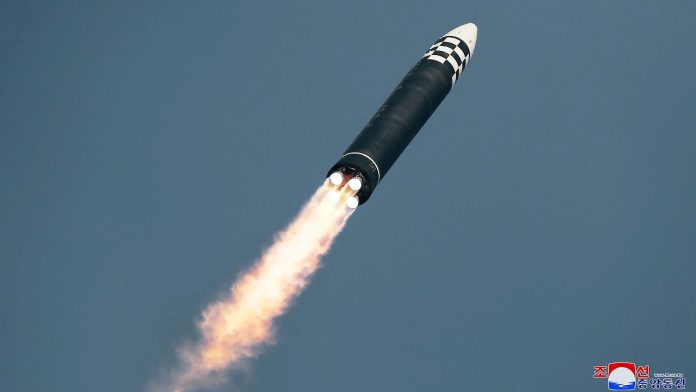 The North Korean leadership around Kim Jong Un is excited about a military confrontation and is conducting a missile test in an absurd manner. But reports are now mounting that in the past week it was not the ludicrous “monster” that was shot down, but an old missile.

According to the South Korean military, North Korea used an old model of the missile in its latest missile test. A representative of Seoul’s Defense Ministry told AFP that, contrary to Pyongyang’s claims, the newly developed “monstrous missile” Hwasong-17 was not launched. Secret services of South Korea and the United States came to the conclusion that the Hwasong-15 ICBM.

Early Tuesday, the ministry noted that there were inconsistencies between the photos North Korea released about the latest missile test and the actual data. For example, a clear sky can be seen in the photos, while on the day in question it was mostly cloudy over the starting point near Pyongyang. Flight characteristics analysis also refers to “Hwasong-15”.

North Korea said it launched its new Hwasong-17 intercontinental ballistic missile last Thursday, which was staged like a Hollywood blockbuster, accompanied by military announcements about the nation’s invincibility. According to observers, North Korea wanted to compensate for the failure of a missile launch a week ago with information about the alleged test of Hwasong-17. At the time, a missile experts say was a Hwasong-17 missile exploded shortly after launch.

At the end of 2017, the North Korean military conducted several tests with the Hwasong-15 ICBM. After that, North Korea, isolated internationally over its nuclear weapons program, refrained from further ICBM tests. But since January, the leadership in Pyongyang has hinted that it could lift its self-imposed moratorium on such tests. The latest missile test was criticized internationally.

Breakthrough at hand: Nuclear treaty with Iran about to be signed