Home science Cold and sore throat or covid? Symptoms of the Omicron variant... 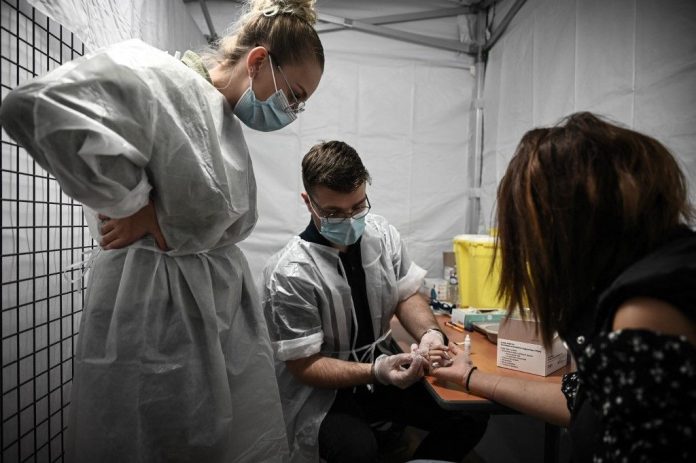 Medical workers perform a serological test before the injection of Moderna’s vaccine against Covid-19 in Mérignac on December 9, 2021.

Classic symptoms of Covid, such as loss of smell, are less common with the new variant

Atlantico: An analysis of cases in London, where Omicron is growing faster, as well as preliminary data from South Africa revealed that the most common signs of the virus between December 3 and December 10 were a runny nose, headache, fatigue and sneezing. Sore throat – symptoms similar to the common cold. It is also said that the cases of loss of sense of taste and smell are declining. How do we explain such changes in symptoms? How robust are these analyzes?

Antoine Flaholt: It should be remembered that the first chain reported from China said that children did not contract the coronavirus and that they played no role in its transmission. Scientists have even made assumptions about the possible immunity of children to other coronaviruses. Today we see that not only is this the case, but also that hospital admissions of children for Covid-19 have reached record numbers. It was also said at the beginning of the epidemic that pregnant women were not at risk, before they are now classified as a priority for immunization because of the increased risks that were clearly noted for them and their fetus. Symptoms reported from the first British and South African case series of Omicron are therefore subject to change over time. The first cases reported during a viral outbreak – this is the situation we encounter when a new variant emerges – often occur in a segment of the population consisting of young, active, healthy people, who have traveled recently on occasion (which also selects people in good physical condition), Highly interconnected, and perhaps well grafted, in short the image of those who do not immediately develop dangerous forms. Since then, symptoms of Covid-19 are known to be mainly benign, such as colds, coughs, sore throats, headaches and fatigue. It is indeed what was described to us in the first reports that reached us with Omicron. Nothing new then. Nothing would give hope that people at greater risk wouldn’t if they occasionally contracted more serious forms of the infection.

From the beginning of the epidemic, we can measure that the insidious nature of the virus paradoxically stems from the benign majority of the clinical picture it causes. SARS, a disease caused by another coronavirus very close to the virus responsible for Covid-19, is an acronym that stands for Severe Acute Respiratory Syndrome. It was massive pneumonia in the affected person (in 2003). Since the beginning of the Covid-19 pandemic, we have not been afraid of contracting Covid-19, because the infection is often simple or even asymptomatic. When we learned that the President, then, Prime Minister was infected, few media outlets, few politicians showed great sympathy, few expressed concern. For US President Trump, the news of his hospitalization shocked the media, but the patient quickly dispelled anxiety. We know the virus kills, but it’s more like Russian roulette than a relentless grim reaper.

Are there still distinct signs of Covid-19 that could indicate a positive case? Is screening the only way to fix?

Loss of smell and taste are symptoms of nerve damage caused by the virus. It is completely specific to Covid-19 because it is rarely found in other respiratory infections that, on the other hand, share most of the symptoms of Covid-19 infection. If, of course, age and olfactory loss are no longer found with omicron, the symptoms of a benign infection may become highly nonspecific and more systematically require testing to allow the diagnosis to be made with greater certainty.

Does this apparent change in symptoms tell us anything about the virulence of the Omicron variant?

Recent work from Imperial College London compared 15,000 cases with the omicron variant with 120,000 cases with the delta variant (https://twitter.com/flahault/status/1471894652961927174?s=21). Unfortunately, this study does not confirm any lower severity associated with the Omicron variant. It will take a few more days to demonstrate the ferocity of the Omicron, but the British, who have extensive experience with this new variant, are not optimistic about this.

Emmanuel Macron takes the field against his opponents