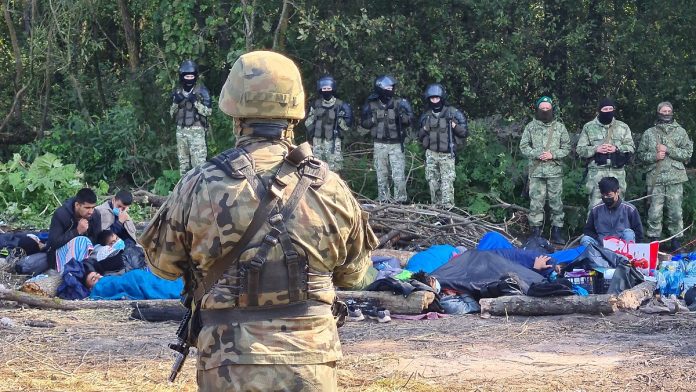 About 30 Afghan refugees are stuck in the no-man’s land between Poland and Belarus. Despite warnings from the European Union, the government in Warsaw sticks to its hard line and refuses entry to migrants. Bulgaria is strengthening its borders with Greece and Turkey.

Poland continues to refuse to allow entry to a group of migrants stranded at the border with Belarus. A Polish border guard spokeswoman told the PAP news agency that the migrants had apparently been provided with food from Belarus so they could stay at the border. According to information provided by Polish aid organizations, the immigrants come from Afghanistan. They have been staying in the border area near the village of Usnarz Gorny for about two weeks in order to get from Belarus to Poland across the EU’s external border. The border guard spokeswoman said the number of people who were not allowed to return to Belarus or continue to Poland has reached 28. Among them are four women, otherwise only men. Before that, the Polish authorities spoke of 24 people, while human rights activists spoke of 32.

The spokeswoman suspected the number was changing because Belarus had allowed people to leave their sites to get food secretly. “We see that the number is changing. Yesterday we also saw that the Belarusian security forces handed them food. They had hot meals and dishes.” Television news channel TVN24 reported in the morning that Polish security forces prevented clergy and volunteers from bringing medicine and food to the migrants the night before. According to the report, Polish border guards, police officers and soldiers denied access to the refugees and returned all helpers. The view of people living in tents is also largely obscured by the company’s cars.

It was only on Thursday that the European Court of Human Rights (ECHR) required the government in Warsaw to take action to help. The Strasbourg-based court ruled that Poland must provide food, water, clothing, medical support and, if possible, temporary accommodation. The court stressed that the decision does not mean that Poland should allow Afghans to enter the country.

“The pressure is growing”: Bulgaria sends soldiers to the border

The day before, the Bulgarian government also announced that it would reinforce the border guards, as more and more refugees from Afghanistan were being apprehended. “The pressure on Bulgaria’s borders is increasing,” Defense Minister Georgi Panaiotov said on Thursday. Therefore, between 400 and 700 soldiers will be sent to reinforce the borders with Greece and Turkey.

In EU countries, memories of the refugee movement from 2015 are still fresh. Panayotov said that the Bulgarian soldiers have the task of “protecting” the border. You can help the police and gendarmerie to “set up barricades” and monitor border facilities. Bulgaria is one of the most important routes for immigrants to Europe from the Middle East and Afghanistan.